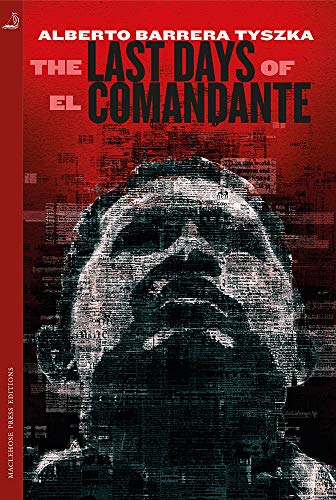 The Last Days of El Comandante
by Alberto Barrera Tyszka

Used Price
$17.49
inc. GST
Free Shipping in Australia
A vivid portrait of life in Hugo Chavez's Venezuela, focusing on the secrets, lies and traumas of the inhabitants of a Caracas apartment block on the eve of his death
Very Good

The Last Days of El Comandante by Alberto Barrera Tyszka

Venezuela 2012: The President's illness casts a shadow over the lives of his citizens - he divides opinion, but life without him is almost unimaginable.

Miguel Sanabria is a retired oncologist, ambivalent towards the President but caught between a virulently anti-Chavez wife and a equally vehement pro-Chavez brother. He is asked by his nephew to hide a mobile phone carrying secret footage that could shed new light on the President's condition.

His neighbour Fredy has found a fresh angle for a new book about Chavez, but to take advantage he must agree to a "green-card" marriage and leave his girlfriend and their son for two months, even as their landlady plots to repossess their home.

In another apartment live nine-year-old Maria and her neurotic, near-agoraphobic mother. Taken out of school to be educated at home, Maria turns to internet chat rooms for company, while her mother's fears about the city's endemic violence are proved tragically prescient.

The fates and fortunes of these neighbours will prove inextricably entwined as the hour of the President's death draws ever closer.

REVIEWS FOR THE SICKNESS

Translated from the Spanish by Rosalind Harvey

Tyszka is a perceptive, original writer. -- Eileen Battersby * Irish Times. *
The Venezuelan Ian McEwan. -- Booktrust.
The best novel about charisma I've read in a long time. Everything it tells us rings true. * Babelia *
His devilish ability to bring together distinct storylines that converge in the apotheosis of a brilliant finale is proof of Barrera's awareness of the finer points of deft and intelligent writing. * El Periodico. *
Barrera's prose is clear, rousing, borne of authenticity when it comes to expressing the contradictions of human beings. * La Vanguardia. *
Why is Alberto Barrera Tyzska's novel so good? Because, from the first phrase to the last, he keeps us interested, curious, and concerned for what will happen. Because this flair of his reveals a great deal of cultivation, study, and insight into the art of creating suspense. Because his ability to create a redoubtable literary space, which we inevitably associate with the International Sanatorium Berghof in The Magic Mountain, Leopold Bloom's Dublin, or mad Ahab's Pequod, is breathtaking. * El Nacional. *

Alberto Barrera Tyszka, poet and novelist, is well known in Venezuela for his Sunday column in the newspaper El Nacional. He co-wrote the internationally bestselling and critically acclaimed Hugo Chavez (2007), the first biography of the Venezuelan president. His novel The Sickness won the prestigious Herralde Prize and was shortlisted for the Independent Foreign Fiction Prize. Homeland or Death was the winner of the Tusquets Prize.

GOR010017949
The Last Days of El Comandante by Alberto Barrera Tyszka
Alberto Barrera Tyszka
Used - Very Good
Paperback
Quercus Publishing
2018-11-08
240
0857056115
9780857056115
N/A
Book picture is for illustrative purposes only, actual binding, cover or edition may vary.
This is a used book - there is no escaping the fact it has been read by someone else and it will show signs of wear and previous use. Overall we expect it to be in very good condition, but if you are not entirely satisfied please get in touch with us.