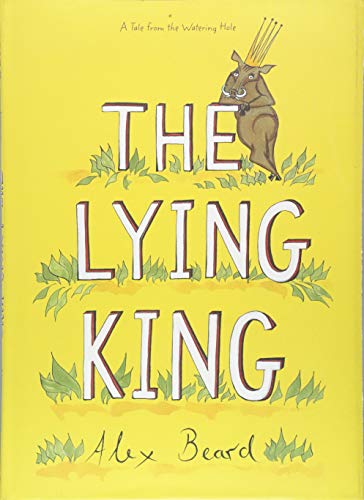 The Lying King by Alex Beard

Can warthogs fly? Do tigers eat tomatoes? For answers, follow along as Warthog lies his way to the throne in this timeless, yet most timely, Tale from the Watering Hole. Find out as Alex Beard's whimsical animals come to life to illuminate real world truths for children of all ages.

The Lying King by Alex Beard

Can warthogs fly? Do tigers eat tomatoes? For answers, follow along as Warthog lies his way to the throne in this timeless, yet most timely, Tale from the Watering Hole. Will the Truth catch up with the king? Find out as Alex Beard's whimsical animals come to life to illuminate real world truths for children of all ages. With a nod to Aesop and Kipling, this funny and pointed parable has lessons for everyone, from the playground to the boardroom and beyond!

"When other animals fail to take a stand, a lying warthog becomes their king with devastating results. "A runt who wanted / to be a huge pig," the warthog "started off small," telling tall tales and lying "to feel big." Claiming night is day and rain is dry, the warthog brags how high he can fly, how great and handsome he is. Many find his behavior shameful but do nothing to stop him. As "his fibbing got bolder," the bullying warthog climbs "up on the backs of his lies" to become king, lying to fill his wallet, questioning "all that was right," and turning subjects against one another. But when "all that was false was spoken as true," his lies eventually ensnare him. Beard spins his relevant cautionary tale in droll verse that builds in intensity as the warthog's dishonesty expands. Signature ink-and-watercolor illustrations feature the warthog and his exotic subjects, drawn in neat, black outlines and filled with pale washes. The plain white background calls attention to the hand-lettered text and drama of the narcissistic warthog, who wears an officious sneer and absurd crown, strutting, posing, leaping, denouncing, and accusing his way across pages as stunned animals collapse beneath his lies. This witty, contemporary fable brilliantly champions truth in an era of fake news, alternative facts, and rampant lies."
--Kirkus Starred Review

Alex Beard is an artist, author, entrepreneur, conservationist, and now political activist. He lives in New Orleans' Garden District in The Pink Elephant with his wife and two children, two dogs, a cat, three turtles, a hedgehog, and a pair of finches.
GOR011053779
The Lying King by Alex Beard
Alex Beard
Used - Like New
Hardback
Greenleaf Book Group LLC
2018-09-28
48
1626345287
9781626345287
N/A
Book picture is for illustrative purposes only, actual binding, cover or edition may vary.
The book has been read, but looks new. The book cover has no visible wear, and the dust jacket is included if applicable. No missing or damaged pages, no tears, possible very minimal creasing, no underlining or highlighting of text, and no writing in the margins
Trustpilot