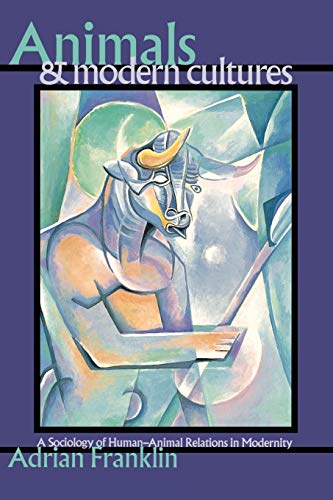 Out of Stock
$32.99
inc. GST
Animals and Modern Culture investigates the dramatic transformation of relationships between humans and animals in the 20th century. The book, focusing on social change and animals, is concerned with how humans relate to animals and how this has changed and why.
Well Read
Only 0 left

Animals and Modern Cultures: A Sociology of Human-Animal Relations in Modernity by Alex Franklin

The dramatic transformation of relationships between humans and animals in the 20th century are investigated in this fascinating and accessible book. At the beginning of this century these relationships were dominated by human needs and interests, modernization was a project which was attached to the goal of progress and animals were merely resources to be used on the path towards human fulfilment. These relationships are increasingly being subjected to criticism and a new field of interest in human-animal relationships has opened up. We are now urged to be more sensitive and compassionate to animal needs and interests, to understand their mindedness and how their lives and ours are entangled.

This book focuses on social change and animals, it is concerned with how humans relate to animals and how this has changed and why. Moreover, it highlights, through chapters on companion animals, hunting and fishing, animal leisures such as birdwatching and wildlife parks, and the meat and livestock industries, how attitudes and practices towards animals vary widely according to social class, ethnicity, gender, region and nation.

Adrian is a prolific researcher, writer and presenter, and is currently editor of SAGE's HSS journal Tourist Studies. He has written numerous articles for a range of journals, from Journal of Sociology and Body and Society to International Review for the Sociology of Sport and Environment and Planning D. He has written three previous book for SAGE: Tourism: An Introduction (2003), Nature and Social Theory (2002) and Animals and Modern Culture (1999). He also presents a television show called The Collectors (ABC, Australia).

Introduction `Good To Think with': Theories of Human-Animal Relations in Modernity From Modernity to Postmodernity The Zoological Gaze Pets and Modern Cultures Naturalizing Sports Hunting and Angling in Modernity Animals and the Agricultural Industry From Farming to Animal Protein Production Animal Foodways Animal Rites

GOR010437262
Animals and Modern Cultures: A Sociology of Human-Animal Relations in Modernity by Alex Franklin
Alex Franklin
Used - Well Read
Paperback
SAGE Publications Inc
1999-03-30
224
0761956239
9780761956235
N/A
Book picture is for illustrative purposes only, actual binding, cover or edition may vary.
This is a used book. We do our best to provide good quality books for you to read, but there is no escaping the fact that it has been owned and read by someone else previously. Therefore it will show signs of wear and may be an ex library book.