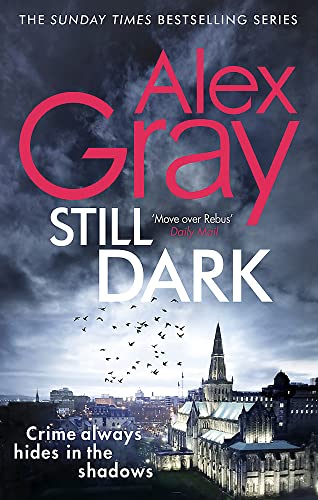 The fourteenth book in the William Lorimer series from bestselling author Alex Gray.

New Year's Eve should be a time for celebrating. A chance to spend time with loved ones and look forward to the year ahead. For DSI William Lorimer, however, this New Year's Eve will be one that he will never forget. Called to a house after gunshots are reported, the carnage he finds there will have a powerful impact on his life - leaving him questioning his future with Police Scotland.

Meanwhile, the man who eluded police capture during Lorimer's last investigation - the Quiet Release case involving the euthanasia of vulnerable patients - is back, and this time he's aligned with a powerful gangster from Glasgow's underworld.

As Lorimer struggles to return to duty and stop this mystery killer once and for all, he discovers that there are forces high up within Police Scotland that are protecting the gangster that holds the key to finding the man they are looking for. Can Lorimer and his team get a killer off the streets for good before more innocent people die?

Few have matched the sustained high quality of [Alex Gray's] output ...What she delivers is sound characterisation, convincing Glaswegian atmosphere and superior writing * The Times *
Alex Gray has been building a reputation as one of the most reliable practitioners of crime fiction at work today * Good Book Guide *

Alex Gray was born and educated in Glasgow. After studying English and Philosophy at the University of Strathclyde, she worked as a visiting officer for the DHSS, a time she looks upon as postgraduate education since it proved a rich source of character studies. She then trained as a secondary school teacher of English. Alex began writing professionally in 1993 and had immediate success with short stories, articles and commissions for BBC radio programmes. She has been awarded the Scottish Association of Writers' Constable and Pitlochry trophies for her crime writing. A regular on the Scottish bestseller lists, her previous novels include Five Ways to Kill a Man, Glasgow Kiss, Pitch Black, The Riverman, Never Somewhere Else, The Swedish Girl and Keep the Midnight Out. She is the co-founder of the international Scottish crime writing festival, Bloody Scotland, which had its inaugural year in 2012.

GOR008758865
Still Dark by Alex Gray
Alex Gray
William Lorimer
Used - Very Good
Paperback
Little, Brown Book Group
2017-10-31
400
0751564427
9780751564426
N/A
Book picture is for illustrative purposes only, actual binding, cover or edition may vary.
This is a used book - there is no escaping the fact it has been read by someone else and it will show signs of wear and previous use. Overall we expect it to be in very good condition, but if you are not entirely satisfied please get in touch with us.