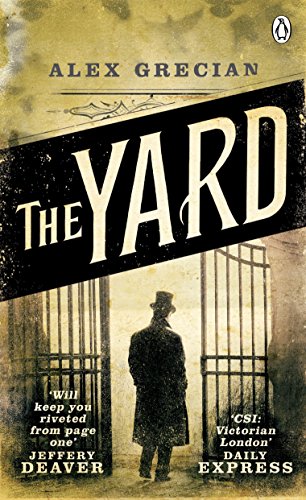 The Yard
by Alex Grecian

In Stock
$17.19
inc. GST
Victorian London is in the grip of a wave of crime and murder, with its citizens no longer able to trust the police to protect them. The newly formed Murder Squad of Scotland Yard, made up of just twelve detectives, battles in vain against the tide of violence and cruelty.
Very Good
9 in stock

If you were fascinated by The Five, you'll love this gripping and atmospheric historical thriller set in Victorian London in the wake of Jack the Ripper.

A killer is haunting London's streets . . .

A year after Jack the Ripper claimed his last victim, London is in the grip of a wave of terror. The newly formed Murder Squad of Scotland Yard battles in vain against the tide of horror.

When the body of a detective is found in a suitcase, his lips sewn together and his eyes sewn shut, it becomes clear that no one is safe from attack.

Has the Ripper returned - or is a new killer at large?

And for Walter Day, the young policeman assigned the case, is time running out?

Praise for The Yard:

'If Charles Dickens isn't somewhere clapping his hands for this one, Wilkie Collins surely is.' New York Times

Alex Grecian worked for an ad agency before returning to writing fiction full-time and raising his son. Alex is the author of the long-running and critically acclaimed comic-book series Proof, and the bestselling Scotland Yard Murder Squad series. He lives in Topeka, Kansas, with his wife and son.

GOR004441205
The Yard: Scotland Yard Murder Squad Book 1 by Alex Grecian
Alex Grecian
Scotland Yard Murder Squad
Used - Very Good
Paperback
Penguin Books Ltd
2013-01-03
592
0241958911
9780241958919
N/A
Book picture is for illustrative purposes only, actual binding, cover or edition may vary.
This is a used book - there is no escaping the fact it has been read by someone else and it will show signs of wear and previous use. Overall we expect it to be in very good condition, but if you are not entirely satisfied please get in touch with us.