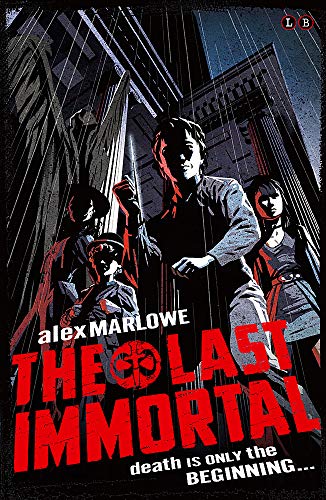 The Last Immortal
by Alex Marlowe

In Victorian London, 13-year-old Luke Frankenstein dreams of joining The Immortals - a supernatural crime-fighting squad, founded by his father Victor. But when Luke secretly follows the Immortals on a mission against the Dark Pharaoh Sanakhte, he is killed.

Luke's body is preserved for 160 years before he is reanimated in the modern day, his body bestowed with superhuman powers and fitted with modern upgrades. Sanakhte has returned and Luke must reunite the scattered Immortals. But to destroy Sanakhte, Luke must uncover a terrible secret hidden in his past....

This has a wonderfully fresh voice and some brilliantly imagined characters and scenarios. It's a great start to a very promising series, full of tension and anticipation * Parents In Touch *

Alex Marlowe lives in London in a crumbling Victorian house he thinks is haunted...or he hopes it is. When he's not strolling the city's streets, he reads gothic novels and has a passion for old martial arts films.

GOR011104253
The Last Immortal: Book 1 by Alex Marlowe
Alex Marlowe
The Last Immortal
Used - Like New
Paperback
Hachette Children's Group
2016-02-09
304
0349131805
9780349131801
N/A
Book picture is for illustrative purposes only, actual binding, cover or edition may vary.
The book has been read, but looks new. The book cover has no visible wear, and the dust jacket is included if applicable. No missing or damaged pages, no tears, possible very minimal creasing, no underlining or highlighting of text, and no writing in the margins.