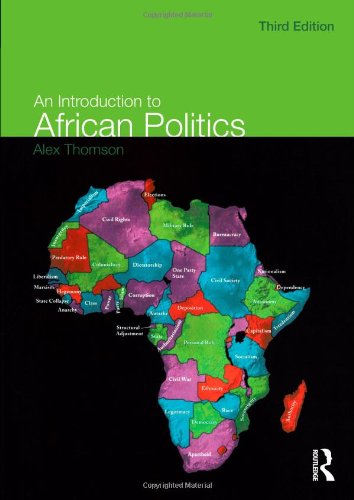 An Introduction to African Politics
by Alex Thomson (University of Coventry, UK)

In Stock
$40.99
inc. GST
Suitable for individuals who are seeking to make sense of the dynamic and diverse political systems that are a feature of Africa.
Like New Very Good Good
Only 1 left

An Introduction to African Politics Summary

An Introduction to African Politics by Alex Thomson (University of Coventry, UK)

The third edition of An Introduction to African Politics continues to be the ideal textbook for those new to the study of this fascinating continent. It gets to the heart of the politics of this part of the world, tackling questions such as: How is modern Africa still influenced by its colonial past? How do strong ethnic identities on the continent affect government? Why has the military been so influential? Why do African states have such difficulty managing their economies? How does African democracy differ from democracy in the West?

The result is a textbook that identifies the essential features of African politics, allowing students to grasp the recurring political patterns that have dominated this continent since independence.

Features and benefits of the third edition:

This expanded, fully revised and updated edition remains the ideal gateway for students seeking to make sense of the dynamic and diverse political systems that are a feature of this fascinating part of the world.

An Introduction to African Politics Reviews

'The diversity of African politics is further illustrated by the inclusion of detailed case studies of individual countries, accompanied by boxed summaries of the main point in each chapter. This is a textbook which is well-presented and user friendly.' - The Times

"No student of Sub-Saharan African politics can afford to be without this text. It is, by a quite considerable degree, the best current work in the field" - Adrian Flint, University of Bristol, UK

Praise for the previous edition:

'This is an excellent book of great use for students. It represents a significant contribution to the study of politics in Africa.' - Jeff Haynes, London Metropolitan University, UK

Alex Thomson is a Principal Lecturer in Politics at Coventry University. His books include Constructive Engagement: US Foreign Policy Towards South Africa, 1981- 1988 (Ashgate, 1996), Get Set for Politics (with Keith Faulks and Ken Phillips, Edinburgh University Press, 2003), and U.S. Foreign Policy Towards Apartheid South Africa, 1948-1994: Conflict of Interests (Palgrave-Macmillan, 2008).

GOR008365153
An Introduction to African Politics by Alex Thomson (University of Coventry, UK)
Alex Thomson (University of Coventry, UK)
Used - Like New
Paperback
Taylor & Francis Ltd
2010-05-17
312
0415482879
9780415482875
N/A
Book picture is for illustrative purposes only, actual binding, cover or edition may vary.
This is a used book - there is no escaping the fact it has been read by someone else and it will show signs of wear and previous use. Overall we expect it to be in very good condition, but if you are not entirely satisfied please get in touch with us.