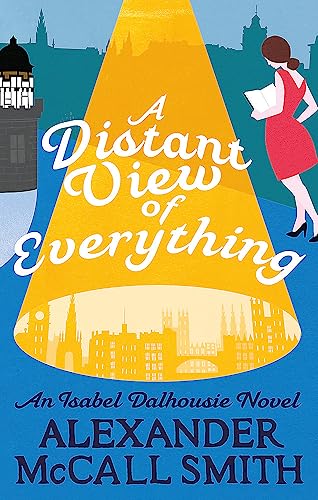 A Distant View of Everything
by Alexander McCall Smith

A Distant View of Everything Summary

A Distant View of Everything by Alexander McCall Smith

Recently distracted by the arrival of her and Jamie's second son, Magnus, Isabel Dalhousie - philanthropic editor of the Review of Applied Ethics - is anxious. The next issue of the Review is far from ready, her eldest, Charlie, is jealous, and their housekeeper, Grace, has an officious approach to childcare. With some relief, Isabel returns to helping out at her niece Cat's delicatessen, where surely the most taxing duty is the preparation of sandwiches.

It's not long before Isabel's helpful, philosophical nature draws her into customers' problems, specifically that of ambitious, self-proclaimed matchmaker, Bea Shandon. Bea has staged a potentially dangerous liaison involving enigmatic plastic surgeon, Tony MacUspaig, who may not be quite who he claims to be - and Isabel's help is required in getting to the truth of the matter.

Good-hearted Isabel proceeds with her usual thorough attention to task, and on Bea's advice talks to her friend Rob, a trustworthy regular on Bea's dinner party circuit, and known to have deep suspicions about MacUspaig. It becomes clear, however, that Rob has an agenda of his own and Isabel is now contending with that, along with a mysterious medical condition of Jamie's and some frustrating dead ends when it comes to Bea's predicament.

When the truth finally reveals itself, Isabel must conclude that along with MacUspaig, Bea, Jamie - and even Cat - she herself is not immune to misunderstandings, or the neurotic fantasies that arise from keeping secrets . . .

Customer Reviews - A Distant View of Everything

A Distant View of Everything Reviews

Alexander McCall Smith is the author of over eighty books on a wide array of subjects, including the award-winning The No.1 Ladies' Detective Agency series. He is also the author of the Isabel Dalhousie novels and the world's longest-running serial novel, 44 Scotland Street. His books have been translated into forty-six languages. Alexander McCall Smith is Professor Emeritus of Medical Law at the University of Edinburgh and holds honorary doctorates from thirteen universities.

GOR009265066
A Distant View of Everything by Alexander McCall Smith
Alexander McCall Smith
Isabel Dalhousie Novels
Used - Like New
Paperback
Little, Brown Book Group
2018-04-05
240
0349142696
9780349142692
N/A
Book picture is for illustrative purposes only, actual binding, cover or edition may vary.
This is a used book - there is no escaping the fact it has been read by someone else and it will show signs of wear and previous use. Overall we expect it to be in very good condition, but if you are not entirely satisfied please get in touch with us.