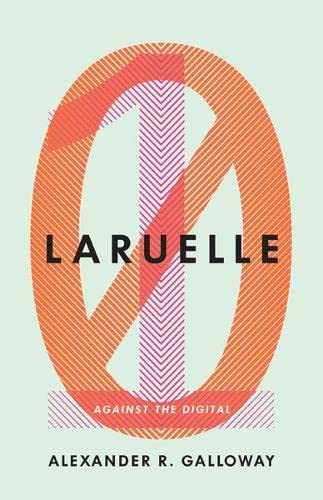 Laruelle: Against the Digital by Alexander R. Galloway

Laruelle is one of the first books in English to undertake in an extended critical survey of the work of the idiosyncratic French thinker Francois Laruelle, the promulgator of non-standard philosophy. Laruelle, who was born in 1937, has recently gained widespread recognition, and Alexander R. Galloway suggests that readers may benefit from colliding Laruelle's concept of the One with its binary counterpart, the Zero, to explore more fully the relationship between philosophy and the digital.

In Laruelle, Galloway argues that the digital is a philosophical concept and not simply a technical one, employing a detailed analysis of Laruelle to build this case while referencing other thinkers in the French and Continental traditions, including Alain Badiou, Gilles Deleuze, Martin Heidegger, and Immanuel Kant. In order to explain clearly Laruelle's concepts such as the philosophical decision and the principle of sufficient philosophy, Galloway lays a broad foundation with his discussions of "the One" as it has developed in continental philosophy, the standard model of philosophy, and how philosophers view "the digital."

Digital machines dominate today's world, while so-called digital thinking-that is, binary thinking such as presence and absence or self and world-is often synonymous with what it means to think at all. In examining Laruelle and digitality together, Galloway shows how Laruelle remains a profoundly non-digital thinker-perhaps the only non-digital thinker today-and engages in an extensive discussion on the interconnections between media, philosophy, and technology.

Alexander Galloway is professor of media, culture, and communication at New York University. His many books include The Interface Effect and The Exploit: A Theory of Networks (Minnesota, 2007).

Part I. Laruelle and the Digital
1. The One Divides in Two
2. The Standard Model
3. The Digital
4. Events

Conclusion: From Digitality to Destiny

GOR008917392
9780816692132
0816692130
Laruelle: Against the Digital by Alexander R. Galloway
Alexander R. Galloway
Posthumanities
Used - Very Good
Paperback
University of Minnesota Press
2014-10-08
304
N/A
Book picture is for illustrative purposes only, actual binding, cover or edition may vary.
This is a used book - there is no escaping the fact it has been read by someone else and it will show signs of wear and previous use. Overall we expect it to be in very good condition, but if you are not entirely satisfied please get in touch with us
Trustpilot