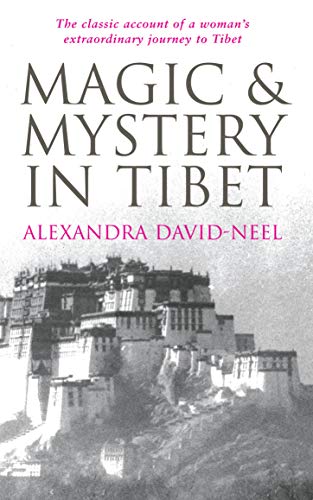 Magic and Mystery in Tibet
by Alexandra David-Neel

Magic and Mystery in Tibet Summary

Magic and Mystery in Tibet by Alexandra David-Neel

Alexandra David-Neel was the first European woman to meet the Dalai Lama and in 1924 became the first to enter the forbidden Tibetan capital, Lhasa. She had already spent a decade travelling through China, living in a cave on the Tibetan border, where she learned about Buddhism from hermits, mystics and bandits. Magic and Mystery in Tibet records the mysterious, magical world David-Neel discovered in Tibet. Among the extraordinary events she describes are the Tibetan mystics who could live naked in temperatures below freezing, the psychic sports practiced in Tibet, the lamas who could run for incredible distances without rest, food or drink and the monks who could defy gravity.

Magic and Mystery in Tibet Reviews

Precisely the person to explore Tibet... Her accounts of Tibetan religious ceremonies and beliefs are the fullest and best we have. -- The New Yorker * . *
A line of women explorers (have) won adulation in far-flung lands... Perhaps the most extraordinary of all was Alexandra David-Neel, the French-Belgian explorer, who travelled to the closed city of Lhasa, and became a Buddhist mystic in the early 20th century. -- The Times * . *
Wonderfully lucid. -- Alan Watts * . *
A fascinating account of the spiritual training of Tibetan monks and mystics... an intriguing book... A true travel classic that will enchant thinkers and adventurers alike. -- Geographical * . *
David-Neel's trailblazing travels were driven by curiosity and deep-seated Buddhist spirituality... Her writings blend descriptions of extraordinary psychic exercises and Bon sorcery... with accounts of the wonders and rigours of early 20th-century travel in remote regions. -- Wanderlust * . *

Alexandra David-Neel was one of the great travel writers and an authority on Tibetan Buddhism, her writings on Buddhism became a great influence on writers such as Jack Kerouac and Allen Ginsberg. She continued to travel and write until her death at 101 years old.

GOR004602387
Magic and Mystery in Tibet by Alexandra David-Neel
Alexandra David-Neel
Used - Very Good
Paperback
Profile Books Ltd
2007-03-08
272
0285637924
9780285637924
N/A
Book picture is for illustrative purposes only, actual binding, cover or edition may vary.
This is a used book - there is no escaping the fact it has been read by someone else and it will show signs of wear and previous use. Overall we expect it to be in very good condition, but if you are not entirely satisfied please get in touch with us.