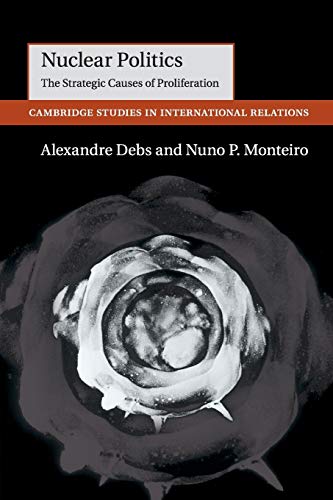 When do states acquire nuclear weapons? Overturning a decade of scholarship focusing on other factors, Debs and Monteiro show in Nuclear Politics that proliferation is driven by security concerns. Proliferation occurs only when a state has both the willingness and opportunity to build the bomb. A state has the willingness to nuclearize when it faces a serious security threat without the support of a reliable ally. It has the opportunity when its conventional forces or allied protection are sufficient to deter preventive attacks. This explains why so few countries have developed nuclear weapons. Unthreatened or protected states do not want them; weak and unprotected ones cannot get them. This powerful theory combined with extensive historical research on the nuclear trajectory of sixteen countries will make Nuclear Politics a standard reference in international security studies, informing scholarly and policy debates on nuclear proliferation - and US non-proliferation efforts - for decades to come.

'This impressive book is a model of judicious scholarship and a landmark in the study of nuclear proliferation. Focusing on the strategic interactions between would-be proliferators, their adversaries, and their allies, Debs and Monteiro present a simple and powerful theory explaining why some states seek the bomb while others choose to forego it. The logic of their argument is straightforward and the evidence they present is compelling. No one interested in strategy, security, or the role of nuclear weapons can afford to ignore this work.' Stephen Walt, Robert and Renee Belfer Professor of International Affairs, Harvard Kennedy School, Harvard University, Massachusetts
'Nuclear Politics is an important book. Debs and Monteiro show that the spread of nuclear weapons is best understood as a three-way strategic interaction between a government contemplating getting the bomb, its adversaries considering how best to stop such acquisition, and its allies calculating whether to coerce or threaten to abandon the ally, to offer renewed security assurances, or to acquiesce in its nuclear proliferation. The authors combine stunningly clear analytic logic with rich historical case studies to produce a major work of social science that should be read by political scientists, historians, and policymakers.' Scott Sagan, Caroline S. G. Munro Professor of Political Science, Stanford University, California
'Nuclear Politics marks an important step forward in our understanding of nuclear proliferation. Focusing explicitly on the strategic interaction between the potential proliferator and its allies and adversaries, the book accounts for patterns of proliferation that no other approach has been able to explain. We see for example why even though nuclear weapons are often described as the 'weapons of the weak', weak states that also lack cover from a great power are unlikely to develop nuclear weapons and, indeed, historically never have.' Robert L. Powell, Robson Professor of Political Science, University of California, Berkeley
'Nuclear Politics significantly advances our understanding of nuclear proliferation by applying a penetrating analytic lens to this critical topic. Debs and Monteiro develop a theory of strategic interaction between the potential proliferator, its adversaries and its allies. Their theory integrates existing insights about the causes of proliferation, demonstrating how they are related to and intertwined with each other; and it gives new prominence to underappreciated features of the potential proliferator's strategic environment, including the possibility that preventive attacks convince states not to acquire nuclear weapons. The book provides impressive empirical support for its theoretical insights.' Charles L. Glaser, Director, Institute for Security and Conflict Studies, Elliott School of International Affairs, George Washington University
'Why have we seen surprisingly few nations obtain the bomb since Hiroshima? Alexandre Debs and Nuno Monteiro provide the most powerful answer to this question yet. Blending painstaking empirical research with a robust theoretical architecture, they show that the major nuclear powers, above all the US, have long deployed ruthless - and effective - policies of nonproliferation, not out of some selfless idealism but because states with bombs threaten their preponderance. The strategic conditions established by these policies, Debs and Monteiro demonstrate, make it relatively uncommon for a nation to be both willing and able to go for the bomb. This elegantly written book provides both authoritative scholarly analysis and a clear blueprint for future US nonproliferation efforts.' Campbell Craig, Cardiff University, and co-author of America's Cold War

GOR009688183
Nuclear Politics: The Strategic Causes of Proliferation by Alexandre Debs (Yale University, Connecticut)
Alexandre Debs (Yale University, Connecticut)
Cambridge Studies in International Relations
Used - Very Good
Paperback
Cambridge University Press
2016-12-15
648
1107518571
9781107518575
N/A
Book picture is for illustrative purposes only, actual binding, cover or edition may vary.
This is a used book - there is no escaping the fact it has been read by someone else and it will show signs of wear and previous use. Overall we expect it to be in very good condition, but if you are not entirely satisfied please get in touch with us.