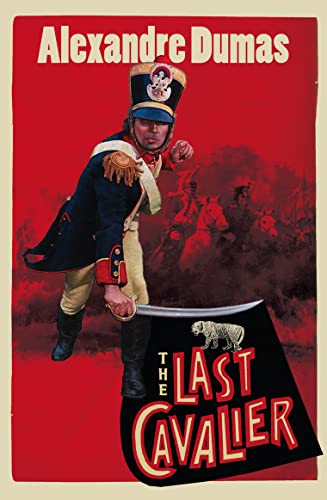 The Last Cavalier
by Alexandre Dumas

The lost final novel by the master of the epic swashbuckling adventure stories: The Count of Monte Cristo and The Three Musketeers.

The Last Cavalier: Being the Adventures of Count Sainte-Hermine in the Age of Napoleon by Alexandre Dumas

The lost final novel by the master of the epic swashbuckling adventure stories: The Count of Monte Cristo and The Three Musketeers.

The last cavalier is Count de Sainte-Hermine, Hector, whose elder brothers and father have fought and died for the Royalist cause during the French Revolution. For three years Hector has been languishing in prison when, in 1804, on the eve of Napoleon's coronation as emperor of France he learns what is to be his due. Stripped of his title, denied the honour of his family name as well as the hand of the woman he loves, he is freed by Napoleon on the condition that he serves in the imperial forces. So it is in profound despair that Hector embarks on a succession of daring escapades as he courts death fearlessly. Yet again and again he wins glory - against brigands, bandits, the British, boa constrictors, sharks, tigers and crocodiles. At the Battle of Trafalgar it is his bullet that fells Nelson. But however far his adventures take him - from Burma's jungles to the wilds of Ireland - his destiny lies always with his father's enemy, Napoleon.

`Dumas is a master of ripping yarns full of fearless heroes, poisonous ladies and swashbuckling adventurers.'
The Guardian

'This first English translation of the last, previously unknown novel by Dumas offers a stunning completion to his fictional mapping of French history...This capacious account of the Napoleonic era represents vintage Dumas and an intensely personal vision of the time.' Publishers Weekly

'A hit from the vaults: Dumas pere's final work...a grand tale of adventure. A big book, and a pleasure for anyone who thrills at the likes of D'Artagnan and company.' Kirkus Review

'Reviews have been unanimous in praising "The Last Cavalier": The novel is a reminder that readers are always willing to make time for epic storytelling when the narrative is in the hands of a master.' Los Angeles Times

`It isn't every publishing season that one gets to welcome a new book by the author of "The Three Musketeers", "The Count of Monte Cristo", and "The Man in the Iron Mask". Or, consequently, to lose oneself afresh - for hundreds of headlong pages - in a state that one can only characterise as narrative bliss, borne along on a stream of daring adventures that courses from dishonour to glory, with all sorts of diverting hurdles and obstacles along the way...with enough plot and passion for a dozen novels, "The Last Cavalier" is sheer delight.' Barnes and Noble Review

`"The Last Cavalier" reads like a Dumas classic. James Bond, Indiana Jones, and many others owe a deep debt to Dumas, who stuffs his tales with thrilling exploits and exotic locales. No one with a pulse will be able to resist Dumas' lost classic.' Christian Science Monitor

Frequently imitated but rarely surpassed, Dumas is one of the best known French writers and a master of ripping yarns full of fearless heroes, poisonous ladies and swashbuckling adventurers. His other novels include The Count of Monte Cristo, The Three Musketeers and The Man in the Iron Mask, which have sold millions of copies and been made into countless TV and film adaptation.

GOR000952281
The Last Cavalier: Being the Adventures of Count Sainte-Hermine in the Age of Napoleon by Alexandre Dumas
Alexandre Dumas
Used - Very Good
Paperback
HarperCollins Publishers
2008-05-05
816
0007274696
9780007274697
N/A
Book picture is for illustrative purposes only, actual binding, cover or edition may vary.
This is a used book - there is no escaping the fact it has been read by someone else and it will show signs of wear and previous use. Overall we expect it to be in very good condition, but if you are not entirely satisfied please get in touch with us.