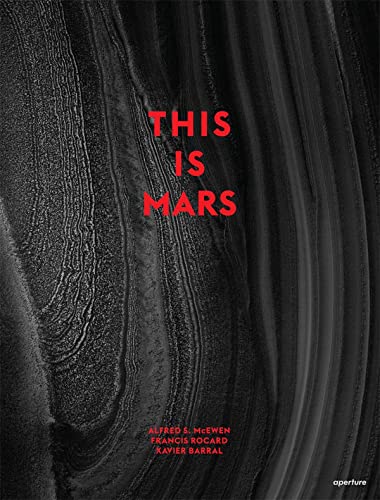 This is Mars
by Alfred S. McEwen

This is Mars Summary

This is Mars by Alfred S. McEwen

This Is Mars offers a previously unseen vision of the red planet. Located somewhere between art and science, the book brings together for the first time a series of panoramic images recently sent back by the U.S. observation satellite MRO (Mars Reconnaissance Orbiter). Since its arrival in orbit in 2006, MRO and its HiRISE telescope have been mapping Mars's surface in a series of exceptionally detailed images that reveal all the beauty of this legendary planet. Each image presents a six-kilometer-wide zone in which the planet's geography and its geological and mineralogical textures are revealed. Conceived as a visual atlas, the book takes the reader on a fantastic voyage-plummeting into the breathtaking depths of the Velles Marineris canyons; floating over the black dunes of Noachis Terra; and soaring to the highest peak in our solar system, the Olympus Mons volcano. The search for traces of water also uncovers vast stretches of carbonic ice at the planet's poles. Seamlessly compiled by French publisher, designer, and editor Xavier Barral, these extraordinary images are accompanied by an introduction by research scientist Alfred S. McEwen, principle investigator on the HiRISE telescope; an essay by astrophysicist Francis Rocard, who explains the story of Mars's origins and its evolution; and a timeline by geophysicist Nicolas Mangold, who unveils geological secrets of this fascinating planet.

This is Mars Reviews

The photographs are credited to NASA/MRO (Mars Reconnaissance Orbiter). Its the most sophisticated camera mankind has ever built and these photos are some of the highest resolution images ever taken. These images are not intented to be art--they are scientific documents, yet they are as great as any art I have seen. For us in the creative world obsessed with photography and art, these images are a strong tonic reminding us of how big and still unknown the universe is. - Alexander Galan, WESC

Who knew the red planet could look so gorgeous in black and white? - Slate

This book is a perfect marriage of science and art. - Telegraph

This is a giant leap for a photo book. - Telegraph

This is Mars celebrates the art of exploration. - The Washington Post

As well as the jaw-dropping imagery that reside on its glossy pages, the design of This is Mars has been impeccably thought out. - It's Nice That

GOR010741861
This is Mars by Alfred S. McEwen
Alfred S. McEwen
Used - Very Good
Hardback
Aperture
2013-10-07
272
1597112585
9781597112581
N/A
Book picture is for illustrative purposes only, actual binding, cover or edition may vary.
This is a used book - there is no escaping the fact it has been read by someone else and it will show signs of wear and previous use. Overall we expect it to be in very good condition, but if you are not entirely satisfied please get in touch with us.