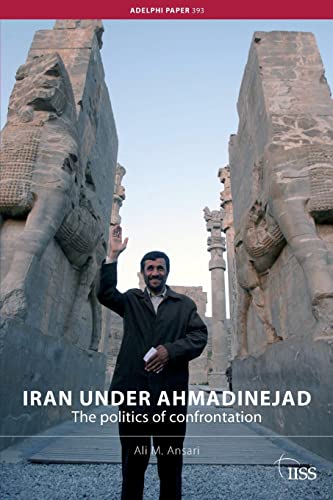 Used Price
$50,99
inc. GST
Free Shipping in Australia
Looks at the details of the political rise of Mahmoud Ahmadinejad, president of the Islamic Republic of Iran, assessing his presidency to date within the context of the dynamics of Iranian politics, and measuring his achievements against his own goals as outlined in 2005.
Reviews:
Trustpilot
Very Good

Iran under Ahmadinejad: The Politics of Confrontation by Ali M. Ansari (University of St Andrews, UK)

The election of Mahmoud Ahmadinejad to the presidency of the Islamic Republic of Iran in the summer of 2005 thrust Iran into the international limelight in a way that few would have predicted. Robust, confrontational and given to bombastic rhetoric, Ahmadinejad has drawn condemnation from the West and praise from the Middle Eastern street in almost equal measure.

This Paper looks at the details of his political rise and assesses his presidency to date within the context of the dynamics of Iranian politics. Examining the key themes of his presidency, it assesses the effectiveness of his policies and analyzes his populist approach, in particular his use of nationalism and the cult of the Twelfth Imam. The author argues that Ahmadinejad, far from retrenching the conservative values of the early revolution, is very much a product of the social and political changes which have occurred since the end of the Iran-Iraq War; that his populism in both politics and economics, along with the maintenance of a confrontational posture abroad, represents an ad hoc, and somewhat incoherent, attempt to disguise the growing contradictions which afflict the Islamic Republic, and the conservative vision of an unaccountable Islamic autocracy in the face of growing dissatisfaction, especially among key sections of the elite.

Ali M. Ansari is Professor of Iranian History and Director of the Institute for Iranian Studies at the University of St Andrews, and Associate Fellow of the Middle East Programme, Royal Institute for International Affairs (Chatham House). He is the author of Confronting Iran: The Failure of US Policy and the Roots of Mistrust (London: Hurst, 2006), Modern Iran Since 1921: The Pahlavis and After, 2nd ed. (London: Longman, 2007), Iran, Islam and Democracy: The Politics of Managing Change, 2nd ed. (London: Royal Institute of International Affairs, 2006) and `Iran and the US in the Shadow of 9/11: Persia and the Persian Question Revisited', in Iranian Studies (June 2006). He has also published articles in The Washington Quarterly and Middle Eastern Studies, and contributed chapters to several books.

GOR001753206
Iran under Ahmadinejad: The Politics of Confrontation by Ali M. Ansari (University of St Andrews, UK)
Ali M. Ansari (University of St Andrews, UK)
Adelphi series
Used - Very Good
Paperback
Taylor & Francis Ltd
2008-01-10
106
0415454867
9780415454865
N/A
Book picture is for illustrative purposes only, actual binding, cover or edition may vary.
This is a used book - there is no escaping the fact it has been read by someone else and it will show signs of wear and previous use. Overall we expect it to be in very good condition, but if you are not entirely satisfied please get in touch with us.