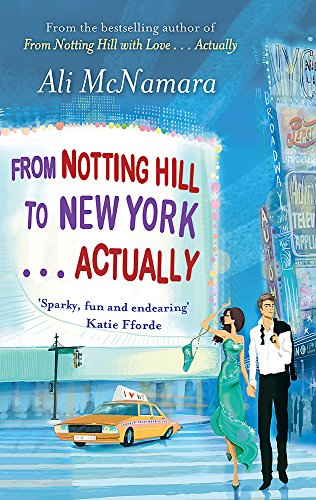 From Notting Hill to New York . . . Actually
by Ali McNamara

From Notting Hill to New York . . . Actually by Ali McNamara

Scarlett O'Brien, utterly addicted to romantic films, has found her leading man. She's convinced Sean is Mr Right, but the day-to-day reality of a relationship isn't quite like the movies. With Sean constantly away on business, Scarlett and her new best friend Oscar decide to head to New York for the holiday of a lifetime.

From one famous landmark to the next, Scarlett and Oscar make many new friends during their adventure - including sailors in town for Fleet Week, a famous film star, and Jamie & Max, a TV reporter and cameraman. Scarlett finds herself strangely drawn to Jamie, they appear to have much in common: a love of films and Jamie's search for a parent he never knew. But Scarlett has to ask herself why she is reacting like this to another man when she's so in love with Sean . . .

An irresistible, feel-good story infused with infectious humour and sprinkled with Manhattan magic * Miranda Dickinson *
If you like your books full of good-looking boys and celeb spotting, it's all here. A funny and light-hearted read * Heat *
A charming page-turner * Star Magazine *
A funny and light-hearted read * Heat *
Another charming page-turner from Ali McNamara * Star Magazine *
Witty and wise * Fabulous Magazine *

Ali McNamara attributes her over-active and very vivid imagination to one thing - being an only child. Time spent dreaming up adventures when she was young has left her with a head bursting with stories waiting to be told.

When stories she wrote for fun on Ronan Keating's website became so popular they were sold as a fundraising project for his cancer awareness charity, Ali realised that not only was writing something she enjoyed doing, but something others enjoyed reading too.

Ali lives in Cambridgeshire with her family and two Labradors. When she isn't writing, she likes to travel, read, and people-watch, more often than not accompanied by a good cup of coffee. Her dogs and a love of exercise keep her sane!
To find out more about Ali visit her website: www.alimcnamara.co.uk or follow her on Twitter: @AliMcNamara

GOR010460897
From Notting Hill to New York . . . Actually by Ali McNamara
Ali McNamara
The Notting Hill Series
Used - Like New
Paperback
Little, Brown Book Group
2012-11-22
448
075154745X
9780751547450
N/A
Book picture is for illustrative purposes only, actual binding, cover or edition may vary.
The book has been read, but looks new. The book cover has no visible wear, and the dust jacket is included if applicable. No missing or damaged pages, no tears, possible very minimal creasing, no underlining or highlighting of text, and no writing in the margins.