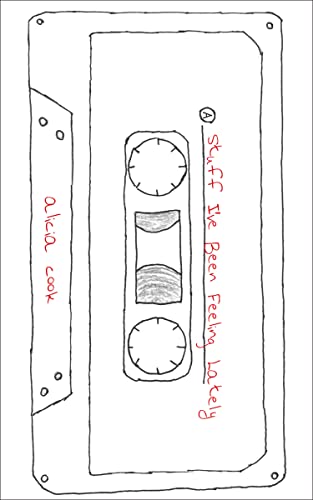 A poet, journalist, and activist, Alicia Cook offers a soundtrack of survival.

Structured like an old-school mix-tape, Stuff I've Been Feeling Lately is Alicia Cook's lyric message to anyone who has dealt with addiction. "Side A" touches on all aspects of the human condition: life, death, love, trauma, and growth. "Side B" contains haunting black-out remixes of those poems.

"...written in the style of an old mix tape (OMG, miss those). Side A is all about life, love, death, hurt, endings, beginnings, family, relationships, and so much more. Side B takes readers on a different journey, utilizing blackout poetry to 'remix' the work Cook compiled on Side A. Pretty cool." (E. CE Miller, Bustle)
Named one of the "25 Best Poetry Books for Teens"
(TeachThought)

Alicia Cook is the curly-haired human behind 2016's bestselling book of poetry, Stuff I've Been Feeling Lately, 2018's I Hope My Voice Doesn't Skip, and 2020's Sorry I Haven't Texted You Back.

Cook dedicates much of her life to shedding light on how drug addiction impacts the mental health of families. An essayist and speaker, her activism to fight the opioid epidemic is far-reaching and has garnered a worldwide readership, and her very own episode on the Emmy-nominated PBS series Here's the Story.

She was the recipient of 2017's Everyday Hero award from NJTV and 2018's Women with Voices award from the Women with Voices Foundation. She was named a 2019 Healthcare Hero finalist by NJBiz. Her magazine writing in higher education earned her three MarCom awards and one Communicator award. Her songwriting has been recognized by American Songwriter Magazine (4x honorable mention), Music City Song Star (semi-finalist), and the American Songwriting Awards (winner). Her alma mater, Georgian Court University, recently awarded her the 2020 Distinguished Alumni award.

She received an MBA from Saint Peter's University and a bachelor's degree in English Literature from Georgian Court University. She currently resides in Newark, NJ, and loves her family (Anthony notwithstanding) and iced coffee.

GOR008943794
Stuff I've Been Feeling Lately by Alicia Cook
Alicia Cook
Used - Very Good
Paperback
Andrews McMeel Publishing
2017-05-04
240
1449487564
9781449487560
N/A
Book picture is for illustrative purposes only, actual binding, cover or edition may vary.
This is a used book - there is no escaping the fact it has been read by someone else and it will show signs of wear and previous use. Overall we expect it to be in very good condition, but if you are not entirely satisfied please get in touch with us.