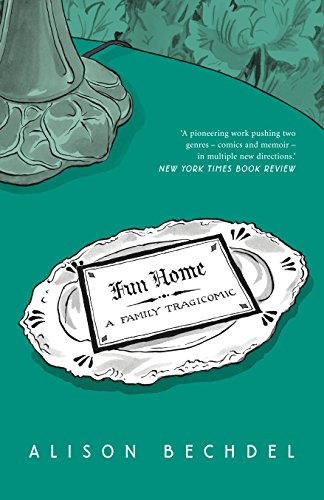 'A sapphic graphic treat' The Times

'A sapphic graphic treat' The Times

Meet Alison's father, a historic preservation expert and obsessive restorer of the family's Victorian home, a third-generation funeral home director, a high-school English teacher, an icily distant parent, and a closeted homosexual who, as it turns out, is involved with his male students and the family babysitter. When Alison comes out as homosexual herself in late adolescence, the denouement is swift, graphic, and redemptive.

Interweaving between childhood memories, college life and present day, and through narrative that is equally heartbreaking and fiercely funny, Alison looks back on her complex relationship with her father and finds they had more in common than she ever knew.

'A groundbreaking masterpiece' The Independent

Bulging with literary allusions from Proust to Scott Fitzgerald, Fun Home is a book that demands to be read again and again. * Royal Academy Magazine *

It is a pioneering work, pushing two genres (comics and memoir) in multiple new directions, with panels that combine the detail and technical proficiency of R. Crumb with a seriousness, emotional complexity and innovation completely its own... A comic book for lovers of words! Bechdel's rich language and precise images combine to create a lush piece of work - a memoir where concision and detail are melded for maximum, obsessive density

Bechdel's memoir offers a graphic narrative of uncommon richness, depth, literary resonance and psychological complexity . . . shares [much] in spirit with the work of Mary Karr, Tobias Wolff, and other contemporary memoirists of considerable literary accomplishement

The recursively told story, which revisits the sites of tragic desperation again and again, hits notes that resemble Jeanette Winterson at her best... She's made a story that's quiet, dignified and not easy to put down

* Publishers Weekly *
One of the very best graphic novels ever * Booklist *

Alison Bechdel is the author of the bestselling memoir Fun Home: A Family Tragicomic and, most recently, Are You My Mother? For twenty-five years, she wrote and drew the comic strip Dykes to Watch Out For, a visual chronicle of modern life - queer and otherwise - considered 'one of the pre-eminent oeuvres in the comics genre.' Alison Bechdel is guest editor of Best American Comics, 2011, and has drawn comics for Slate, McSweeney's, Entertainment Weekly, Granta, and the New York Times Book Review.

GOR007872168
Fun Home: A Family Tragicomic by Alison Bechdel
Alison Bechdel
Used - Like New
Paperback
Vintage Publishing
2006-09-14
240
0224080512
9780224080514
N/A
Book picture is for illustrative purposes only, actual binding, cover or edition may vary.
This is a used book - there is no escaping the fact it has been read by someone else and it will show signs of wear and previous use. Overall we expect it to be in very good condition, but if you are not entirely satisfied please get in touch with us.