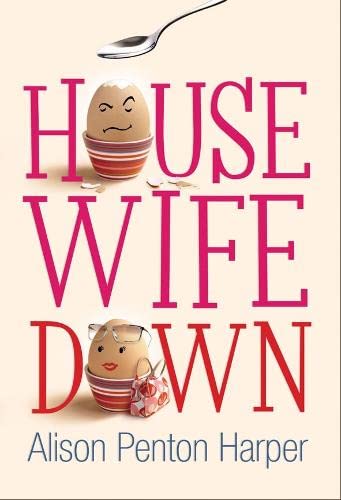 Housewife Down
by Alison Penton Harper

Housewife Down by Alison Penton Harper

The days I had previously filled with the duties of chief cook and bottle-washer now lay strangely empty and stretched out before me like a blank canvas. I kept looking at it, but couldn't think of anything to paint . . .

Preparing dinner for her husband's colleagues, nervous, and listening to a woman complain about domestic slavery on the radio, Helen Robbins hits the bottle hard. For thirteen years she has lived a life of suburban predictability with Robert, bending to his boorish demands and allowing her once vital, independent spirit to retreat into the safety cage of mundane, dutiful routine. Over supper that evening she decides to throw off her role of domestic angel and hit him where it hurts: she dares to criticise his driving

Riled by his wife's comments over dinner an irate Robert sets out the next morning to prove himself and is killed in a freak accident. Helen's life is about to transform.

As she rekindles relationships with old friends and close family, Helen rediscovers the excitement of her former world. Tentatively stepping back into the fold, imbued with a new sense of power and adventure, she discovers for the first time the possibility of a relationship on her own terms - as well as certain thrill she never quite believed possible . . . and the surprises are only just beginning . . .

Alison was born in London in 1964 to an English father and Indian mother. After a convent education she stumbled into advertising, later setting up her own business. Alison lives in Northamptonshire with her husband and two daughters.

GOR003138957
Housewife Down by Alison Penton Harper
Alison Penton Harper
Used - Very Good
Paperback
Pan Macmillan
2005-09-16
288
0330441205
9780330441209
N/A
Book picture is for illustrative purposes only, actual binding, cover or edition may vary.
This is a used book - there is no escaping the fact it has been read by someone else and it will show signs of wear and previous use. Overall we expect it to be in very good condition, but if you are not entirely satisfied please get in touch with us.