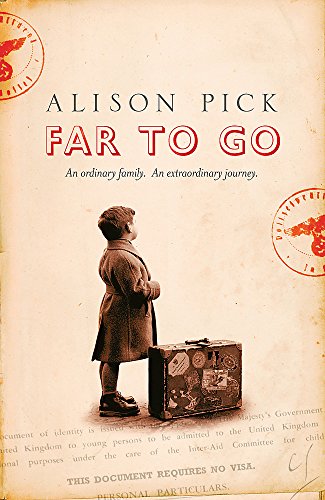 Far to Go
by Alison Pick

Used Price
$17.19
inc. GST
Free Shipping in Australia
The history of the Kindertransport and one family's desperate struggle to escape Czechoslovakia during the Nazi invasion.
Reviews:
Trustpilot
Very Good

Far to Go by Alison Pick

Longlisted for the 2011 MAN BOOKER PRIZE for Fiction, FAR TO GO is a powerful and profoundly moving story about one family's epic journey to flee the Nazi occupation of their homeland in 1939, and above all to save the life of a six-year-old boy.

Pavel and Anneliese Bauer are affluent, secular Jews, whose lives are turned upside down by the arrival of the German forces in Czechoslovakia. Desperate to avoid deportation, the Bauers flee to Prague with their six-year-old son, Pepik, and his beloved nanny, Marta. When the family try to flee without her to Paris, Marta betrays them to her Nazi boyfriend. But it is through Marta's determination that Pepik secures a place on a Kindertransport, though he never sees his parents or Marta again.

Inspired by Alison Pick's own grandparents who fled their native Czechoslovakia for Canada during the Second World War, FAR TO GO is a deeply personal and emotionally harrowing novel.

'Clean, crisp and unencumbered. Pick . . . creates small moments that are both lovely and frightening . . . It's very deftly structures and the storytelling is seamless' * Globe and Mail *
'Somewhere between a book and a miracle' * Catherine Ryan Hyde, author of Love in the Present Tense *
'A nuanced and layered portrait of betrayal . . . An intriguing experiment in the art of storytelling' * Montreal Gazette *
'Expertly crafted in every sense' * thestar.com *
'Pick unties the dark knots of the past to imagine the stories that could never otherwise be known' * Marina Endicott, author of Good to a Fault *

Alison Pick is the author of FAR TO GO, longlisted for the 2011 Man Booker Prize, and winner of the Canadian Jewish Book Award for fiction; and a memoir, BETWEEN GODS, which was shortlisted for the Wingate Prize. She is also the author of two collections of poetry, and a novel, THE SWEET EDGE, all of which were published to wide acclaim. She lives in Toronto, Canada.

GOR003407327
Far to Go by Alison Pick
Alison Pick
Used - Very Good
Paperback
Headline Publishing Group
2011-05-12
320
075537942X
9780755379422
N/A
Book picture is for illustrative purposes only, actual binding, cover or edition may vary.
This is a used book - there is no escaping the fact it has been read by someone else and it will show signs of wear and previous use. Overall we expect it to be in very good condition, but if you are not entirely satisfied please get in touch with us.