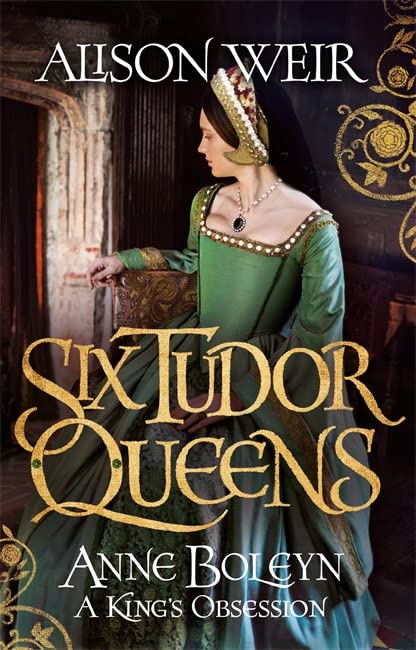 Anne Boleyn: A King's Obsession by bestselling historian Alison Weir, author of Katherine of Aragon: The True Queen, is the second captivating novel in the Six Tudor Queens series. An unforgettable portrait of the ambitious woman whose fate we know all too well, but whose true motivations may surprise you. Essential reading for fans of Philippa Gregory and Elizabeth Chadwick.


The young woman who changed the course of history.

Fresh from the palaces of Burgundy and France, Anne draws attention at the English court, embracing the play of courtly love.

But when the King commands, nothing is ever a game.

Anne has a spirit worthy of a crown - and the crown is what she seeks. At any price.

ANNE BOLEYN. The second of Henry's Queens. Her story.
History tells us why she died. This powerful novel shows her as she lived.

Prominent royal biographer and historical novelist Weir is well-placed to craft this detailed fictional
portrait of Henry VIII's second wife . . . She explores Anne's influences and motivations, creating a
multifaceted portrait of an ambitious woman who reluctantly accedes to Henry's courtship and later acts
out of desperation to protect herself and her daughter, Elizabeth. Even readers who know Anne's story
well should gain insights from this revealing novel

* Booklist on Anne Boleyn: A King's Obsession *
Weir is excellent on the little details that bring a world to life * Guardian *
This exquisite book charts the rise and fall of Henry VIII's first wife, Katherine... A fascinating insight into this period of our history. Weir's undeniable strength is her immaculate description, enabling the reader to be transported back to Tudor England * Sun *
Weir manages to untangle the complex web of 16th-century politics, shown through Katherine's duties as ambassador, and her astute reading of the games being played. This adds greatly to the heft of the character, demonstrating what a competent woman she was becoming * Herald Scotland *
Katherine of Aragon, The True Queen is a true tour de force. Finely crafted, this novel is wonderful historical fiction and an outstanding introduction to the Six Tudor Queens series * Queen Anne Boleyn Blog *
Alison Weir clearly admires her heroine ... meticulously researched * The Times *
Captivating... The way that Katherine comes alive on the page is credit to the author who has such a breadth of knowledge about this Tudor period that it's a real pleasure to read her fictional work * Jaffareadstoo Blog *
This well-researched and engrossing read gives a new perspective on the long-suffering first wife * Good Housekeeping *
Known for bestselling historical biographies, Alison Weir is in command of her detail . . . her handling of Katherine's misery and dignified response to her predicament is very touching -- Elizabeth Buchan * Daily Mail *
The authentic voice of Katherine rings true throughout. It is a study of a woman who inspires admiration as well as sympathy ... a fitting tribute to a queen who was unduly wronged by history * Lady *
This ambitious, engrossing novel tells Katherine's story from that moment, through her brief and controversial marriage to Prince Arthur and then to his brother, the handsome, gallant Henry VIII ... Fascinating * S Magazine (Sunday Express) *
Alison ensures that we not only come away knowing more of the real Katherine, we understand more of how it felt to be her... The author really enables us to feel the claustrophobia and paranoia as Katherine tries to make decisions for her day to day life on snippets of news from her advisors - advisors she begins to realise may not be telling her the truth * The Book Bag *
Alison Weir brings Henry VIII's first queen to life, revealing a strong, spirited and intelligent woman fighting for her rights and those of her daughter * Choice magazine *
Weir's opening foray into the life of Katherine of Aragon presents Henry's first and most enduring marriage from a refreshingly new and utterly gripping perspective * Lancashire Evening Post *
Brilliantly rich * Heat *
Alison Weir is the top-selling female historian (and the fifth-bestselling historian overall) in the United Kingdom, and has sold over 3 million books worldwide. She has published nineteen history books, including her most recent non-fiction book, Queens of the Crusades, the second in her England's Medieval Queens quartet. Alison has also published several historical novels, including Innocent Traitor and The Lady Elizabeth. Katharine Parr: The Sixth Wife is Alison Weir's eleventh published novel and the final book in the Six Tudor Queens series about the wives of Henry VIII, which was launched in 2016 to great critical acclaim. All five previous novels in the series were Sunday Times bestsellers. Alison is a fellow of the Royal Society of Arts and an honorary life patron of Historic Royal Palaces.
GOR008787971
9781472227638
1472227638
Six Tudor Queens: Anne Boleyn, A King's Obsession: Six Tudor Queens 2 by Alison Weir
Alison Weir
Six Tudor Queens
Used - Very Good
Paperback
Headline Publishing Group
2017-05-18
544
N/A
Book picture is for illustrative purposes only, actual binding, cover or edition may vary.
This is a used book - there is no escaping the fact it has been read by someone else and it will show signs of wear and previous use. Overall we expect it to be in very good condition, but if you are not entirely satisfied please get in touch with us
Trustpilot