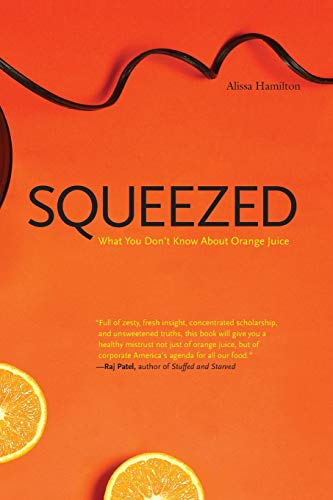 Out of Stock
$94.99
inc. GST
Explores the hidden history of orange juice. This book looks at the early forces that propelled orange juice to prominence, including a surplus of oranges that plagued Florida during most of the twentieth century and the army's need to provide vitamin C to troops overseas during World War II.
Like New
Only 0 left

Squeezed: What You Don't Know About Orange Juice by Alissa Hamilton

Close to three quarters of U.S. households buy orange juice. Its popularity crosses class, cultural, racial, and regional divides. Why do so many of us drink orange juice? How did it turn from a luxury into a staple in just a few years? More important, how is it that we don't know the real reasons behind OJ's popularity or understand the processes by which the juice is produced?

In this enlightening book, Alissa Hamilton explores the hidden history of orange juice. She looks at the early forces that propelled orange juice to prominence, including a surplus of oranges that plagued Florida during most of the twentieth century and the army's need to provide vitamin C to troops overseas during World War II. She tells the stories of the FDA's decision in the early 1960s to standardize orange juice, and the juice equivalent of the cola wars that followed between Coca-Cola (which owns Minute Maid) and Pepsi (which owns Tropicana). Of particular interest to OJ drinkers will be the revelation that most orange juice comes from Brazil, not Florida, and that even "not from concentrate" orange juice is heated, stripped of flavor, stored for up to a year, and then reflavored before it is packaged and sold. The book concludes with a thought-provoking discussion of why consumers have the right to know how their food is produced.

"Behind the wholesome facade industry has created for orange juice is Alissa Hamilton's remarkable story of corporate power, marketing, trade and labor issues, and shrinking biodiversity. This story needs telling."-Kelly D. Brownell, Ph.D., Yale University, co-author of Food Fight: The Inside Story of The Food Industry, America's Obesity Crisis, and What We Can Do About It

"Full of zesty, fresh insight, concentrated scholarship, and unsweetened truths, Alissa Hamilton's Squeezed will give you a healthy mistrust not just of orange juice, but of corporate America's agenda for all our food."-Raj Patel, author of Stuffed and Starved

". . . reveals that orange juice, with its image as a natural Florida product . . . is often shipped from South America. . . . Consumers have a right to know what they're consuming . . . and that is at the heart of [the] story."-Devra First, Boston Globe

Alissa Hamilton is a Food and Society Policy Fellow with the Institute for Agriculture and Trade Policy. She lives in Toronto.

GOR010390447
Squeezed: What You Don't Know About Orange Juice by Alissa Hamilton
Alissa Hamilton
Yale Agrarian Studies Series
Used - Like New
Paperback
Yale University Press
2010-06-01
288
0300164556
9780300164558
N/A
Book picture is for illustrative purposes only, actual binding, cover or edition may vary.
The book has been read, but looks new. The book cover has no visible wear, and the dust jacket is included if applicable. No missing or damaged pages, no tears, possible very minimal creasing, no underlining or highlighting of text, and no writing in the margins.