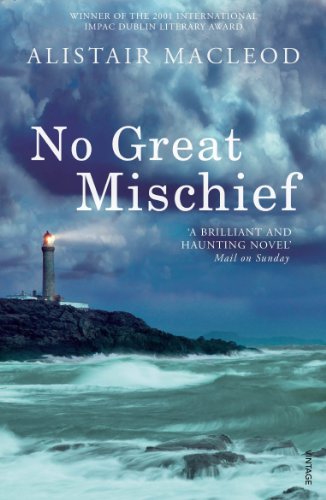 No Great Mischief
by Alistair MacLeod

In Stock
$14.49
inc. GST
In 1779, driven out of his home, Calum MacDonald sets sail from the Scottish Highlands with his extensive family.
Very Good Good
8 in stock

No Great Mischief by Alistair MacLeod

In 1779, driven out of his home, Calum MacDonald sets sail from the Scottish Highlands with his extensive family. After a long, terrible journey he settles his family in 'the land of trees', and eventually they become a separate Nova Scotian clan: red-haired and black-eyed, with its own identity, its own history. It is the 1980s by the time our narrator, Alexander MacDonald, tells the story of his family, a thrilling and passionate story that intersects with history: with Culloden, where the clans died, and with the 1759 battle at Quebec that was won when General Wolfe sent in the fierce Highlanders because it was 'no great mischief if they fall'.

"You will find scenes from this majestic novel burned into your mind forever" -- Alice Munro
"One of the great undiscovered writers of our time" -- Michael Ondaatje
"The novel is close to being a masterpiece. The characters, the light and the weather, the story itself - its beautiful tone and shape, its harsh and melancholy music - stay with you for days afterwards. The novel is simply breathtaking in its emotional range" -- Colm Toibin * Irish Times *
"Exceptional... The book is pervaded by the humour and colour; intensely vivid, and very, very moving" * Independent *
"Alistair MacLeod is a wonderfully talented writer" -- Margaret Atwood

Alistair MacLeod was born in 1936 and raised in Cape Breton, Nove Scotia. MacLeod is the author of two short story collections, The Lost Salt Gift of Blood (1976) and As Birds Bring Forth the Sun and Other Stories (1986) and the novel, No Great Mischief, published in 1999. Written over the course of thirteen years, No Great Mischief won numerous Canadian literary awards and the 2001 International IMPAC Dublin Literary Award. All of his published short stories, plus one new piece, were collected in Island, published in 2000. Alistair MacLeod died in 2014.

GOR000478359
No Great Mischief by Alistair MacLeod
Alistair MacLeod
Used - Very Good
Paperback
Vintage Publishing
2001-04-30
272
0099283921
9780099283928
Winner of IMPAC Dublin Literary Award 2001 Winner of International IMPAC Dublin Literary Award 2001
Book picture is for illustrative purposes only, actual binding, cover or edition may vary.
This is a used book - there is no escaping the fact it has been read by someone else and it will show signs of wear and previous use. Overall we expect it to be in very good condition, but if you are not entirely satisfied please get in touch with us.