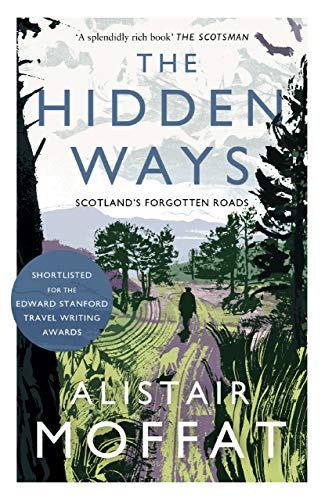 The Hidden Ways
by Alistair Moffat

In Stock
$20.99
inc. GST
A powerful, surprising exploration of Scotland's landscape and its hidden history
Very Good Good
Only 2 left

Shortlisted for the Edward Stanford Travel Writing Awards In The Hidden Ways, Alistair Moffat traverses the lost paths of Scotland - its Roman roads tramped by armies, its byways and pilgrim routes, drove roads and railways, turnpikes and sea roads - in a bid to understand how our history has left its mark upon our landscape. As he retraces the forgotten paths that shaped and were shaped by the lives of the now forgotten people who trod them, Moffat charts a powerful, surprising and moving history of Scotland.

Our ancestors walked everywhere, unless they lived by a river or loch and travelled by boat, or were rich enough to keep a horse or pony. So Moffat will walk. He will walk over much of Scotland, following, sometimes struggling to follow, old roads that are now sometimes hard to find. This book is the story of a dozen such walks. This is a splendidly rich book - a treasure-house of information, memories and speculation -- Allan Massie * * The Scotsman * *
This fascinating and compelling narrative will leave you spellbound and in no time you'll be looking for your hiking boots and waterproofs . . . An absorbing and thought-provoking addition to the literature of Scotland's byways * * Countryfile * *
The Hidden Ways makes us think about Scotland and its history in a completely different way . . . A truly fascinating read * * Sunday Mail * *
Retracing and walking Scotland's lost paths makes Alistair Moffat reflect upon the country's history in a different sort of way . . . From Perthshire to Ballachulish, Moffat explores the land in a personal, inquisitive way and searches for evidence of the people who helped shape it * * Outdoor Photography * *
A treasure trove of stories * * The Great Outdoors * *
A fine history of the wild, walkable country * * Wanderlust * *
Praise for The Great Tapestry of Scotland: 'Not just visually stunning but intensely moving and occasionally very funny * * The Times * *
Praise for The Border: 'Quirky, learned and utterly absorbing -- ALLAN MASSIE
Praise for The Scots: 'Truly fascinating * * Scotsman * *
Praise for Scotland: 'A very readable, well-researched and fluent account * * Scotland on Sunday * *

Alistair Moffat was born in Kelso, Scotland in 1950. He is an award-winning writer, historian and Director of Programmes at Scottish Television, former Director of the Edinburgh Festival Fringe, and former Rector of the University of St Andrews. He is the founder of Borders Book Festival and Co-Chairman of The Great Tapestry of Scotland.

GOR009244671
The Hidden Ways: Scotland's Forgotten Roads by Alistair Moffat
Alistair Moffat
Used - Very Good
Paperback
Canongate Books Ltd
2018-05-02
336
1786891034
9781786891037
Short-listed for The Edward Stanford Travel Writing Awards - Marco Polo Outstanding General Travel Themed Book of the Year 2018 (UK)
Book picture is for illustrative purposes only, actual binding, cover or edition may vary.
This is a used book - there is no escaping the fact it has been read by someone else and it will show signs of wear and previous use. Overall we expect it to be in very good condition, but if you are not entirely satisfied please get in touch with us.