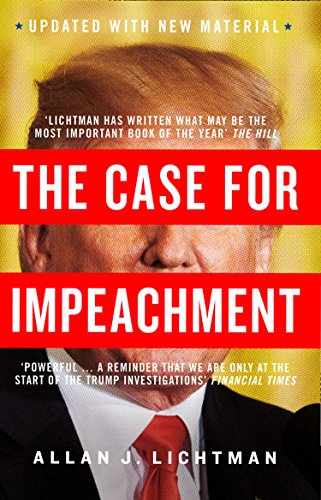 The Case for Impeachment
by Allan J. Lichtman

The Case for Impeachment Summary

The Case for Impeachment by Allan J. Lichtman

Impeachment will `proceed from the misconduct of public men, or, in other words, from the abuse or violation of some public trust,' and `they relate chiefly to injuries done immediately to the society itself. '
(Alexander Hamilton, The Federalist, 1788)

In The Case for Impeachment, Professor Lichtman lays out the reasons why Congress removing Donald J. Trump has become a matter of `when' not `if'. Shedding some light on the consequences of his ties with Russia before and after the election, complicated financial conflicts of interest at home and abroad and abuse of executive authority, this is an authoritative and comprehensive analysis of the most controversial presidency since Richard Nixon.

Customer Reviews - The Case for Impeachment

The Case for Impeachment Reviews

`Important ... Lichtman beautifully tells the story of the use of Impeachment' Washington Book Review

`Lichtman's powerful book is a reminder that we are only at the start of the Trump investigations. The US system takes a long time to gather speed. Once it does, it can be hard to stop' Financial Times

`You need to read `The Case for Impeachment', a brilliant analysis of every fraudulent act committed by the child in the White House' Counterpunch

`[Lichtman's] book is a pretty substantial case for why Donald Trump should not have been president at all...'The Case for Impeachment' is a good backdrop for conversations that will likely remain a part of our national dialogue for some time' New York Journal of Books

`It is still striking to see the full argument unfold and realize that you don't have to be a zealot to imagine some version of it happening ... Lies. Abuse of power. Treason. Crimes against humanity. Martial law. Lichtman throws everything Trump's way' Washington Post

ALLAN J. LICHTMAN is a Distinguished Professor of History at American University in Washington, DC, and is the author of many prize-winning books including The Keys to the White House and Predicting the Next President.
www.thecaseforimpeachment.com

GOR009653474
The Case for Impeachment by Allan J. Lichtman
Allan J. Lichtman
Used - Very Good
Paperback
HarperCollins Publishers
2018-07-12
352
0008292671
9780008292676
N/A
Book picture is for illustrative purposes only, actual binding, cover or edition may vary.
This is a used book - there is no escaping the fact it has been read by someone else and it will show signs of wear and previous use. Overall we expect it to be in very good condition, but if you are not entirely satisfied please get in touch with us.