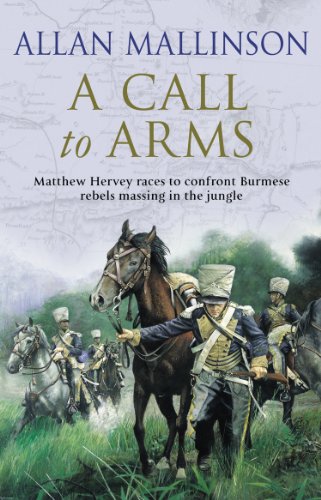 A Call To Arms
by Allan Mallinson

Out of Stock
$18.49
inc. GST
India 1819Matthew Hervey is charged with raising a new troop, and organising transport for India - for he, his men and their horses are to set sail with immediate effect.
Very Good
Only 0 left

A Call To Arms Summary

A Call To Arms: (Matthew Hervey 4) by Allan Mallinson

India 1819 Matthew Hervey is charged with raising a new troop, and organising transport for India - for he, his men and their horses are to set sail with immediate effect. What Hervey and his greenhorn soldiers cannot know is that in India they will face a trial for which they are ill prepared. A large number of Burmese war-boats are assembled near Chittagong, and the only way to thwart their advance involves a hazardous march through the jungle.Soon Hervey and his troop are in the midst of hot and bloody action once again... 'The book picks up a pace that mirrors a cavalry charge ...Hervey continues to grow in stature, while Mallinson himself continues to delight.' Observer

A Call To Arms Reviews

"'Wonderfully vivid... the real delight of Mallinson's books is their authenticity... His portrayal of his characters, as well as his vignettes of historical personages...show a rare and thoughtful understanding of the huan condition and the mind of the soldier. It all makes for a thoroughly satisfying and entertaining read'" * The Times *
"Thrilling... In addition to his exceptional knowledge of history, Allan Mallinson shows his deep awareness of human feelings and failings. This is an exceptional book." * Country Life *
"A riveting tale of heroism, derring do and enormous resource in the face of overwhelming adversity ... Another prime example of the unputdownable historical novel" * The Times *
"'Oozing action, A Call to Arms is a military tale of epic proportions that will leave fans counting the days to the next adventure'" * Ireland on Sunday *
"'With each book, Hervey himself is becoming a more complex and interesting characters...Mallinson writes of his inner questionings with subtlety and sympathy. This series grows in stature with each book'" * Evening Standard *

The last two years have not been good ones for Matthew Hervey. His beloved wife Henrietta is dead and, believing that he can no longer remain in a regiment where men like Lord Towcester can rise to command, he has turned his back on the 6th Light Dragoons. He is left kicking his heels in a corrupt and unruly England far removed from its once glorious past. 1819 sees Hervey in Rome with his sister Elizabeth, where a chance meeting with one of England's most controversial men of letters leads him to rethink his future. Joined by his old friend Captain Peto, Hervey realizes just how much he has missed the excitement of military action and the camaraderie of the Sixth. Soon he is en route for Hounslow via Whitehall, where he hurriedly purchases a new commission and is refitted for the uniform of his former regiment. There he finds things much changed for the better. Though depleted in numbers, they are now under the assured leadership of Sir Ivo Lankester, brother of Edward Lankester, hero of Waterloo. Hervey's first task is to raise a new troop and then to organize transport, for his men and horses are to set sall for India with immediate effect. What Hervey and his greenhorn soldiers cannot know is that in India they will face a trial for which they are sorely ill-prepared. For a large number of Burmese warboats are being assembled near the headwaters of the river leading to Chittagong, and the only way to thwart their advance involves an arduous and hazardous march through the jungle. Hervey and his troop find themselves in the midst of hot and bloody action once more.

GOR001044274
A Call To Arms: (Matthew Hervey 4) by Allan Mallinson
Allan Mallinson
Matthew Hervey
Used - Very Good
Paperback
Transworld Publishers Ltd
2003-03-03
384
0553813501
9780553813500
N/A
Book picture is for illustrative purposes only, actual binding, cover or edition may vary.
This is a used book - there is no escaping the fact it has been read by someone else and it will show signs of wear and previous use. Overall we expect it to be in very good condition, but if you are not entirely satisfied please get in touch with us.