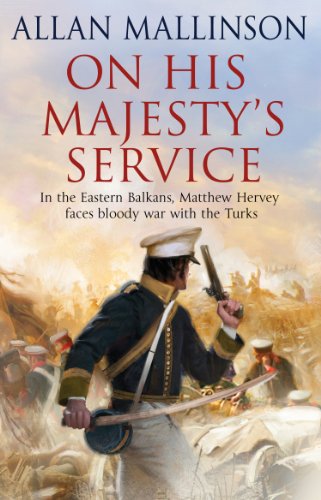 On His Majesty's Service
by Allan Mallinson

Used Price
$15.99
inc. GST
Free Shipping in Australia
January 1829: George IV is on the throne, Wellington is England's prime-minister, and snow is falling thickly on the London streets as Lieutenant-Colonel Matthew Hervey is summoned to the Horse Guards in the expectation of command of his regiment, the 6th Light Dragoons.
Reviews:
Trustpilot
Very Good

On His Majesty's Service Summary

On His Majesty's Service: (Matthew Hervey 11) by Allan Mallinson

January 1829: George IV is on the throne, Wellington is England's prime-minister, and snow is falling thickly on the London streets as Lieutenant-Colonel Matthew Hervey is summoned to the Horse Guards in the expectation of command of his regiment, the 6th Light Dragoons. But the benefits of long-term peace at home mean cuts in the army, and Hervey is told that the Sixth are to be reduced to a single squadron. With his long-term plans in disarray, he undertakes instead a six-month assignment as an observer with the Russian army. Soon Hervey, his friend Edward Fairbrother and his faithful groom, Private Johnson, are sailing north to St Petersburg, and from there to the Eastern Balkans, and the ferocious war between Russia and the Ottoman Empire. Hervey is meant to be an impartial spectator in the campaign, but soon the circumstances - and his own nature - propel him into a more active role. In the climactic Battle of Kulewtscha, in which more troops were engaged than in any battle since Waterloo, Hervey and Fairbrother find themselves in the thick of the action. For Matthew Hervey, the stakes have never been higher - or more personal.

Customer Reviews - On His Majesty's Service

On His Majesty's Service Reviews

"What is left to be said about Allan Mallinson? Only this perhaps: he has done for the British army what C.S. Forester and Patrick O'Brian did for the royal navy, and his novels are every bit as addictive as theirs... On His Majesty's Service is the tenth of his Matthew Hervey novels... Splendid, irresistible stuff, and not for addicts only" -- Allan Massie * SPECTATOR *
"A fascinating lively romp" * THE TIMES *

GOR004093234
On His Majesty's Service: (Matthew Hervey 11) by Allan Mallinson
Allan Mallinson
Matthew Hervey
Used - Very Good
Paperback
Transworld Publishers Ltd
2012-06-07
464
0553818643
9780553818642
N/A
Book picture is for illustrative purposes only, actual binding, cover or edition may vary.
This is a used book - there is no escaping the fact it has been read by someone else and it will show signs of wear and previous use. Overall we expect it to be in very good condition, but if you are not entirely satisfied please get in touch with us.