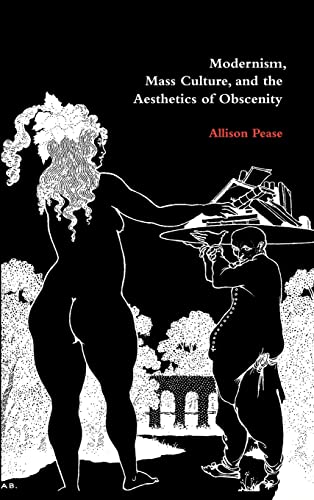 In Stock
$79.99
inc. GST
This book explores the relationship between art and pornography from the eighteenth to the twentieth century. Allison Pease focuses on how writers such as Swinburne, Joyce and Lawrence and artist Aubrey Beardsley shifted the boundaries between aesthetics and pornography first established in the 1700s to reinforce class distinctions.
Very Good
Only 1 left

Modernism, Mass Culture, and the Aesthetics of Obscenity Summary

How did explicit sexual representation become acceptable in the twentieth century as art rather than pornography? Allison Pease answers this question by tracing the relationship between aesthetics and obscenity from the 1700s onwards, highlighting the way in which early twentieth-century writers incorporated a sexually explicit discourse into their work. Pease explores how artists such as Swinburne, Aubrey Beardsley, James Joyce and D. H. Lawrence were responsible for shifting the boundaries between aesthetics and pornography that first became of intellectual interest in the eighteenth century and reinforced class distinctions. Her analysis of canonical works, such as Joyce's Ulysses and Lawrence's Lady Chatterley's Lover, is framed by a wide-ranging examination of the changing conceptions of aesthetics from Shaftesbury, Hutcheson and Kant to F. R. Leavis, I. A. Richards and T. S. Eliot. Based on extensive archival work, the book includes examples of period art and illustrations which eloquently demonstrate the shift in public taste and tolerance.

Modernism, Mass Culture, and the Aesthetics of Obscenity Reviews

"Pease's energetic writing style enlivens the impressively dense scholarship that underwrites the argument throughout her book...Modernism, Mass Culture, and the Aesthetics of Obscenity will speak to students and professors of aesthetics, philosophy, and literature, and it should serve as a model of interdisciplinary engagement for scholars throughout the humanities." South Central Review
"...Pease has produced a provocative book likely to stir some controversy in academic circles." Choice
"Pease contributes significantly to the study of this compelling topic." Modernism/Modernity
"This is an impressive book-elegantly conceived and suffused with intelligence...The book is meticulously researched and exceptionally well-documented, with clear, eloquently chiseled arguementation unusually strong in its logic and relatively free of obfuscating jargon...Throughout her study, she does an excellent job of positioning eighteenth-, nineteenth-, and twentieth-century aesthetic philosophies within the cultural politics of their respective times..." English Literature in Transition
"Modernism, Mass Culture, and the Aesthetics of Obscenity offers a rich addition to studies of the limits of representation and material culture in the late nineteenth and early twentieth century. ...provocative, highly persuasive..." The Wordsworth Circle

1. Civil society: aesthetics and pornography in the eighteenth century; 2. Victorian obscenities: the new reading public, pornography and Swinburne's sexual aesthetic; 3. The mastery of form: Beardsley and Joyce; 4. Being disinterested: D. H. Lawrence; 5. Modernist criticism: the battle for culture and the accommodation of the obscene.