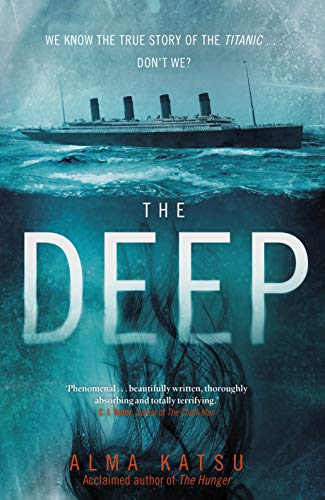 The Deep
by Alma Katsu

A spine-tingling novel that 'blends psychological thriller and eerie gothic ghost story to create something truly haunting' said SARAH PINBOROUGH, bestselling author of Behind Her Eyes

Someone - or something - is haunting the Titanic.

A spine-tingling novel that 'blends psychological thriller and eerie gothic ghost story to create something truly haunting' said SARAH PINBOROUGH, bestselling author of Behind Her Eyes

Someone - or something - is haunting the Titanic.

Deaths and disappearances have plagued the vast liner from the moment she began her maiden voyage on 10 April 1912. Four days later, caught in what feels like an eerie, unsettling twilight zone, some passengers - including millionaire Madeleine Astor and maid Annie Hebbley - are convinced that something sinister is afoot. And then disaster strikes.

Four years later and the world is at war. Having survived that fateful night, Annie is now a nurse on board the Titanic's sister ship, the Britannic, refitted as a hospital ship. And she is about to realise that those demons from her past and the terrors of that doomed voyage have not finished with her yet . . .

Bringing together Faustian pacts, the occult, tales of sirens and selkies, guilt and revenge, desire and destiny, The Deep offers a thrilling, tantalizing twist on one of the world's most famous tragedies.

The way Alma Katsu weaves the true story of the Titanic and her sister ship, Britannic, with this dark, terrifying tale of possession and haunting is phenomenal. Part history, part drama, part love story, part creepy-as-heck ghost tale, with chills icier than the watery depths, The Deep is beautifully written, thoroughly absorbing and totally terrifying.' -- C.J. TUDOR, author of The Chalk Man
At once both tragic and chilling, The Deep perfectly blends psychological thriller and eerie gothic ghost story to create something truly haunting, drawing you down into its dark depths before finally letting you up for air. -- SARAH PINBOROUGH, author of Behind Her Eyes
Another masterly supernatural reimagining of a historical tragedy: the sinking of the Titanic and her sister ship, the Britannic. Eerie, haunting, and filled with suspense, The Deep is a whirlpool of a novel that pulls you in and doesn't let go. -- DANIELLE TRUSSONI, author of the Angelology series and The Ancestor
An incredibly ambitious setting, prose as ornate as the boat, mood as ghostly as Gothic, and what must have been enough research to build a ship of her own . . . The Deep is thrilling, rich, frightening, unsettling, and, best of all, told from the heart . . . The Hunger was fantastic, but The Deep is divine . . . a brilliant author. -- JOSH MALERMAN, author of Bird Box
Elegant and eerie. Alma Katsu really is something rather special. -- JOHN CONNOLLY
THE DEEP weaves together the true story of the Titanic and its sister ship Britannic, with a love story and a creepy tale of the supernatural. * SFX *
An all-too-human tale of obsessive love that crosses the boundary . . . between the material realm and the spiritual. * Financial Times *

A graduate of the Masters writing program at Johns Hopkins University in Baltimore, Alma Katsu worked briefly in advertising and PR before moving into the intelligence world, working as a senior analyst for several US agencies, including the CIA and the American equivalent of GCHQ. She was also a regular contributor to the Huffington Post. Alma Katsu lives in the Washington, DC area. To find out more, visit her website almakatsubooks.com

GOR010407287
The Deep: We all know the story of the Titanic . . . don't we? by Alma Katsu
Alma Katsu
Used - Like New
Hardback
Transworld Publishers Ltd
2020-03-05
432
1787631346
9781787631342
N/A
Book picture is for illustrative purposes only, actual binding, cover or edition may vary.
The book has been read, but looks new. The book cover has no visible wear, and the dust jacket is included if applicable. No missing or damaged pages, no tears, possible very minimal creasing, no underlining or highlighting of text, and no writing in the margins.