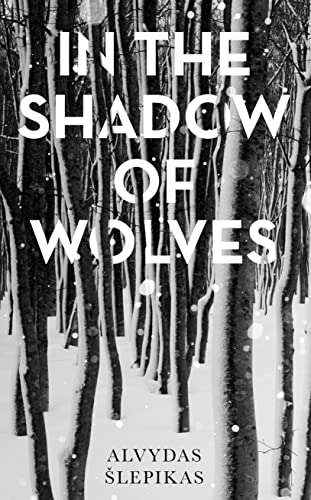 In the Shadow of Wolves
by Alvydas Slepikas

In the Shadow of Wolves Summary

In the Shadow of Wolves: A Times Book of the Year, 2019 by Alvydas Slepikas

THE SECOND WORLD WAR IS OVER. BUT THE WORLD IS FAR FROM SAFE.

As victorious Russian troops sweep across East Prussia, a group of desperate children face a new battle. Confronted by critical food shortages and the onset of a bitterly cold winter, these 'wolf children' secretly cross the border into Lithuania in search of work or food to take back to their starving families. In a world still reeling from the devastation of war, the children must risk everything to survive.

In the Shadow of Wolves is a story of resilience, devastation and, ultimately, hope. Based on meticulous research, Alvydas Slepikas's stunningly powerful debut novel has won over readers and critics across the world.

In the Shadow of Wolves Reviews

'This novel's unflinching portrait of a forgotten tragedy is haunting.' * The Times, Best New Historical Fiction: July 2019 *
'Has the simple narrative structure and heightened quality of a fable... Slepikas has a vivid vision and lyricism which lifts the prose and ensures it is anything but derivative.' * Big Issue *
'This is stunning. Cinematic, powerful... [In the Shadow of Wolves] has an irresistible, emotional pull that is as fascinating as it is brilliant, with a sense of heartbreak rather than trauma.' * Victoria's Book Reviews *
'A heartbreaking blend of historical facts and literary prose.' * Foreword Reviews *
'A raw and tender true tale... It's no wonder that this elegant and intricate debut has garnered its Lithuanian author many awards.' * LoveReading *
'Vivid, highly dramatic and compelling... Alvydas Slepikas has broken the dam of silence.' * Dresdner Neueste Nachrichten *
'In the Shadow of Wolves...reminded me in some ways of reading the work of Cormac McCarthy... Slepikas imbues barren East Germany and the forests of post-war Lithuania with the dark undertones of a fairytale.' * Splice *
'This novel finds the perfect balance between documentary and literary narrative.' * Kieler Nachrichten *
'A significant work of memorialisation... Slepikas - who is also a scriptwriter and director - injects his writing with a dramatic urgency that seeks to capture the scale of extraordinary suffering.' * The Calvert Journal *
'In the Shadow of Wolves is a gem of Lithuanian literature. It touches a nerve as it tells the story of those who survived an awful fate, who have experienced the most terrible things.' * Alfa.lt *
'The novel portrays the unending suffering of children, themselves innocent of the actions of their fathers, subject to indiscriminate cultural and political prejudice... Examples of kindness only throw into sharp relief the cruelty of social and cultural dislocation.' * Otago Daily Times *
'Alvydas Slepikas uses direct yet poetic language to write about a period of history that has remained almost entirely buried until now. His concise prose conveys the tragedy of the situation and contains rich details about that time and place.' * Siaures Atenai *
'This novel is intriguing, important and innovative - Alvydas Slepikas confronts present with past, and cruelty and agony go hand in hand with love and self-sacrifice. His aim was to help young readers understand some of the horrors of war, and he achieves this.' * Election Year Books *
'This novel differs from other works of its kind; in its narration, and its sensitive, poetic style. Alvydas Slepikas paints a beautiful picture of the world through a child's eyes - with the help of fairy tales and dreams, creating a complete contrast to the bitter reality.' * bernardinai.lt *
'In the Shadow of Wolves paints a very realistic, bleak picture of life after the Second World War. The novel is unique in its story, which focuses on the life of Germans and Lithuanians after the war, and because it will not only warm readers' hearts, but will also inspire them to live.' * 15min.lt *
'Alvydas Slepikas has written a sensitive novel that takes us back to a time filled with death, violence, hunger and bitter cold. This novel broke the taboo of silence in Lithuania.' * Eckard Scheld, Leipzig Book Fair *
'Alvydas Slepikas uses concise language and fast-paced scenes to portray the children's will to survive, the unimaginable cruelty as well as the help that some of the children received. Highly recommended.' * ekz service for libraries *
'In poetic language that is by turns concise and compact, Alvydas Slepikas brings justice for his young heroes and victims. Readers can almost smell the cold sweat of the women and girls as they encounter drunken soldiers, feel the deep, penetrating hunger, the biting winter cold, the beatings suffered and handed out by children as they fight for a single morsel of food, and share in their despair and their sheer will to survive.' * hansen & munk *
'In the Shadow of Wolves is fast-paced, with the children sharing one experience after another. And the reader is always there too, hiding with the children in old railway trains, praying and hoping with them.' * BR24 (Germany) *
'This story is complex... [and] dramatises the real lives of the "wolf children" of East Prussia.' * Spectrum magazine, Sydney Morning Heral *
'There are many reasons to read this book...an incredible sense that [it] is going to rip your heart out.' * The Bookshelf (ABC Radio, Australia) *

Alvydas Slepikas is one of the most multi-talented contemporary Lithuanian writers - he is a poet, prose writer, playwright, screenwriter, actor and director. He has frequently edited editions originating from the annual Spring Poetry Festival, edited the cultural weekly, Literatura ir menas, and currently oversees the fiction section of this journal. Romas Kinka works as a forensic linguist and a literary translator and finds that the two disciplines complement one another. Born in Lithuania, he has lived in England on and off since the age of six but returns to his motherland every day by translating the work of Lithuanian authors.

GOR010387836
In the Shadow of Wolves: A Times Book of the Year, 2019 by Alvydas Slepikas
Alvydas Slepikas
Used - Very Good
Paperback
Oneworld Publications
2020-03-05
208
1786077043
9781786077042
Winner of Georg Dehio Book Prize 2018 (Germany) Winner of Justinas Marcinkevicius Prize. Winner of Writers' Union Award, Lithuania.
Book picture is for illustrative purposes only, actual binding, cover or edition may vary.
This is a used book - there is no escaping the fact it has been read by someone else and it will show signs of wear and previous use. Overall we expect it to be in very good condition, but if you are not entirely satisfied please get in touch with us.