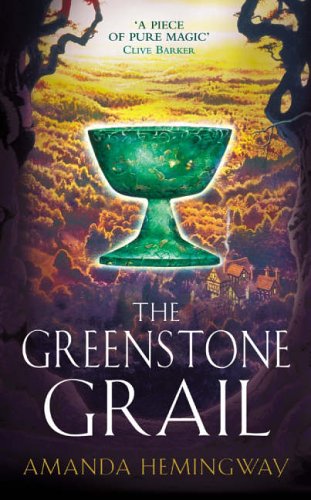 The Greenstone Grail
by Amanda Hemingway

The first book in a brand new trilogy from the author of Prospero's Children.

The Greenstone Grail: The Sangreal Trilogy One by Amanda Hemingway

The first book in a brand new trilogy from the author of Prospero's Children.

Bartlemy Goodman is approximately 1500 years old. An albino of Greek parentage he was born in Byzantium amidst the decline of the Roman Empire and now resides in the village of Thornyhill, England with his dog, Hoover.

Bartlemy is one of the Gifted. But long experience has taught him the perils of the power of the witch-kind and so throughout the ages has channelled his considerable talents into cooking, his culinary prowess becoming the stuff of legend: he worked for the Borgias, was among the first to discover chocolate and even taught the likes of Escoffier.

On a warm evening in 1991 a young homeless woman holding a baby turns up on Bartlemy's doorstep and he senses destiny at work. The woman's name is Annie Ward and her son, Nathan, is an exceptional child as Annie cannot account for his conception. Her husband Daniel died in a car accident so Nathan cannot be his. Soon Bartlemy comes to believe that the boy was created beyond the Gate of Death by a superior being for a special purpose, one that may threaten all of witch-kind and that it is his job to protect him.

Whilst Nathan grows and Bartlemy continues to watch over the small family, strange occurrences begin to plague the village. The Thorn family, who gave their name to the village have lived close by since pre-Christian times, were once the guardians of a strange cup of greenish stone and set with jewels. When it was lost; sold to a Jewish collector in Austria by the black sheep of the family who absconded with it in the 1920's, the family's fortune soon followed suit. Rumoured to have been stolen by the Nazis during the war it has now turned up at Sotheby's and the last of the Thorns is determined to get it back by proving the original sale false.

Bartlemy joins his friend, Rowena Thorn, in her campaign. But the matter becomes complicated and sinister when Nathan discovers the body of the Austrian owner in the wood nearby and begins to experience disturbing visions involving the cup itself.

`Prospero's Children is a piece of pure magic - a charming, eccentric, and powerfully imaginative work of fantasy which will enchant readers for years to come'
Clive Barker

`A lyrical, captivating first novel of mermaids, magic, lost worlds, and found souls. I read it with deep appreciation for the author's storytelling skills, her memorable images and language, and her ability to make me feel so strongly about her characters. Once read, this book will not be forgotten'
Terry Brooks

Amanda Hemingway has already lived through one lifetime - during which she travelled the world and supported herself through a variety of professions, including those of actress, barmaid, garage hand, laboratory assistant, journalist and model. Her new life is devoted to her writing, but she also finds time to ride, ski and attend the opera

GOR001096841
The Greenstone Grail: The Sangreal Trilogy One by Amanda Hemingway
Amanda Hemingway
Used - Very Good
Paperback
HarperCollins Publishers
2005-05-03
386
0007153872
9780007153879
N/A
Book picture is for illustrative purposes only, actual binding, cover or edition may vary.
This is a used book - there is no escaping the fact it has been read by someone else and it will show signs of wear and previous use. Overall we expect it to be in very good condition, but if you are not entirely satisfied please get in touch with us.