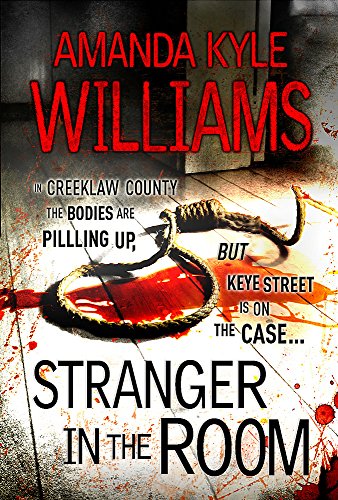 Stranger In The Room (Keye Street 2)
by Amanda Kyle Williams

Stranger In The Room (Keye Street 2): A chilling murder mystery to set your pulse racing by Amanda Kyle Williams

Keye Street, ex-FBI profiler and private detective, always looks out for those closest to her. But sometimes looking after herself is quite enough to handle. She's teetering on the brink, not quite sure if she's winning or losing in her battle with herself. But when her cousin, Miki Ashton, sees a stranger inside her house, it's time for Keye to lend a hand.

Meanwhile, Keye's mentor, Lieutenant Aaron Rauser, is embroiled in a disturbing case. When a dog returns alone from its walk, the hunt is on for the missing boy. As the mystery deepens and the bodies pile up, Rauser needs Keye's expert profiling skills to unravel the killer's bizarre signature - tears.

Battling her demons takes up a lot of Keye's time. But on top of that she's battling the bad guys. If she can ignore the voice from her past, that is...

'Smart, ironic and compelling, this 21st century heroine is certain to gather ever more fans as the series unfolds. She is too great a character not to last. Catch her before she becomes a household name.' * Daily Mail *
'Williams has created one of the most realistic protagonists in crime fiction that I've had the thrill to read' * Tess Gerritsen *
'An exceptionally smart, funny and character driven debut' * Karin Slaughter *
'This is one Street worth acquainting yourself with' * Sun *
'An explosive, unpredictable and psychologically complex thriller that turns crime fiction cliches inside out... Those looking for a strong female protagonist not a sexpot and as intelligent, tough, and flawed as any male thriller hero will be richly rewarded' * Publishers Weekly *

Amanda Kyle Williams has contributed to numerous short story collections, has written some small press novels and worked as a freelance writer for the Atlanta Journal Constitution. In order to research this book, she studied criminal profiling and took law enforcement courses in Atlanta. This is her first serial killer novel, and she is currently working on her third, also featuring Keye Street.

GOR010725619
Stranger In The Room (Keye Street 2): A chilling murder mystery to set your pulse racing by Amanda Kyle Williams
Amanda Kyle Williams
Keye Street
Used - Like New
Paperback
Headline Publishing Group
2013-03-14
416
0755384229
9780755384228
N/A
Book picture is for illustrative purposes only, actual binding, cover or edition may vary.
The book has been read, but looks new. The book cover has no visible wear, and the dust jacket is included if applicable. No missing or damaged pages, no tears, possible very minimal creasing, no underlining or highlighting of text, and no writing in the margins.