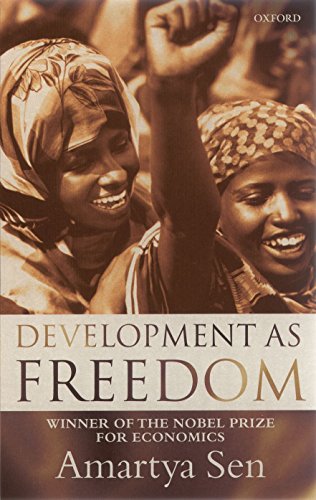 Used Price
$24.99
inc. GST
Free Shipping in Australia
This title is a synthesis of the thought of economist Amartya Sen, who views economic development as a means to extending freedoms rather than an end in itself. By widening his outlook to include poverty, tyranny, lack of opportunity, individual rights, and political structures, Professor Sen provides a useful overview of the development process.
Reviews:
Trustpilot
Very Good Good Well Read

In Development as Freedom Amartya Sen explains how in a world of unprecedented increase in overall opulence millions of people living in the Third World are still unfree. Even if they are not technically slaves, they are denied elementary freedoms and remain imprisoned in one way or another by economic poverty, social deprivation, political tyranny or cultural authoritarianism. The main purpose of development is to spread freedom and its 'thousand charms' to the unfree citizens. Freedom, Sen persuasively argues, is at once the ultimate goal of social and economic arrangements and the most efficient means of realizing general welfare. Social institutions like markets, political parties, legislatures, the judiciary, and the media contribute to development by enhancing individual freedom and are in turn sustained by social values. Values, institutions, development, and freedom are all closely interrelated, and Sen links them together in an elegant analytical framework. By asking 'What is the relation between our collective economic wealth and our individual ability to live as we would like?' and by incorporating individual freedom as a social commitment into his analysis Sen allows economics once again, as it did in the time of Adam Smith, to address the social basis of individual well-being and freedom.

an enjoyable, unusual and important contribution * John Mulqueen, Irish Times 02/02/01 *
The connecting theme behind these essays is that development is about expanding people's ability to do things that they have a reason to value. The rationale for this is discussed with great force, clarity and consistency. * S.V. Subramanian, Progress in Development Studies 1(1), Jan 01. *
the ideas are presented in a very accessible, nontechnical language. The writing is lucid with interesting story-telling openings ... a topical and timely appeal to an audience that cuts across disciplines. * S.V. Subramanian, Progress in Development Studies 1(1), Jan 01. *
a brilliant book. Sen ranges over a vast intellectual landscape ... Many authors try this kind of tour d'horizon but few succeed as well as Amartya Sen. He is a multi-faceted scholar who has thought deeply and rigorously and has published extensively. Although Development as Freedom covers imense territory, it is subtle and nuanced and its careful scholarship is manifest at every turn. * Lars Osberg, Reviews, Compte Rendus, Autumn 2000. *
Sen has looked for ways to empower the poor ... Development as Freedom is a testament to Sen's unwavering commitment to the task ... this is economics that should be read: not merely for the elegance of its arguments or the wisdom of its judgements, but for the deep and burnished humanity that animates it. * David Goldblatt, The Independent *
Development as Freedom is a personal manifesto: a summing up; a blend of vision, close argument, reflection and reminiscence. * The Economist *
The world's poor and dispossessed could have no more articulate or insightful a champion among economists than Amartya Sen. By showing that the quality of our lives should be measured not by our wealth but by our freedom, his writings have revolutionized the theory and practice of development. The United Nations, in its own development work, has benefited immensely from the wisdom and good sense of Professor Sen's views. * Kofi A. Annan, Secretary General of the United Nations *
In this book, Amartya Sen develops elegantly, compactly, and yet broadly the concept that economic development is in its nature an increase in freedom. By historical examples, empirical evidence, and forceful and rigorous analysis, he shows how development, broadly and properly conceived, cannot be antagonistic to liberty but consists precisely in its increase. * Kenneth J. Arrow, Nobel Laureate in Economic Science *
Amartya Sen has made several key contributions to research on fundamental problems in welfare economics. By combining tools from economics and philosophy, he has restored an ethical dimension to the discussion of vital economic problems. * From the Royal Swedish Academy Announcement of the Award of the 1998 Nobel Prize in Economic Science. *

Introduction: Development as Freedom ; 1. The Perspective of Freedom ; 2. The Ends and the Means of Development ; 3. Freedom and the Foundations of Justice ; 4. Poverty as Capability Deprivation ; 5. Markets, States, and Social Opportunity ; 6. The Importance of Democracy ; 7. Famines and Other Crises ; 8. Women's Agency and Social Change ; 9. Population, Food and Freedom ; 10. Culture and Human Rights ; 11. Social Choice and Individual Behaviour ; 12. Individual Freedom as a Social Commitment

GOR001773727
Development as Freedom by Amartya Sen, FBA (Master, Master, Trinity College, Cambridge)
Amartya Sen, FBA (Master, Master, Trinity College, Cambridge)
Used - Very Good
Paperback
Oxford University Press
2001-01-18
384
0192893300
9780192893307
N/A
Book picture is for illustrative purposes only, actual binding, cover or edition may vary.
This is a used book - there is no escaping the fact it has been read by someone else and it will show signs of wear and previous use. Overall we expect it to be in very good condition, but if you are not entirely satisfied please get in touch with us.