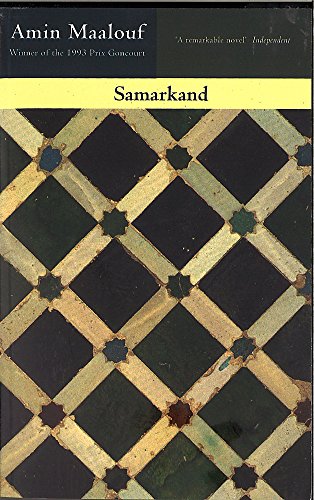 Accused of mocking the inviolate codes of Islam, the Persian poet and sage Omar Khayyam fortuitously finds sympathy with the very man who is to judge his alleged crimes. Recognising genius, the judge decides to spare him and gives him instead a small, blank book, encouraging him to confine his thoughts to it alone.

Thus begins the seamless blend of fact and fiction that is Samarkand. Vividly re-creating the history of the manuscript of the Rubaiyaat of Omar Khayyam, Amin Maalouf spans continents and centuries with breathtaking vision: the dusky exoticism of 11th-century Persia, with its poetesses and assassins; the same country's struggles nine hundred years later, seen through the eyes of an American academic obsessed with finding the original manuscript; and the fated maiden voyage of the Titanic, whose tragedy led to the Rubaiyaat's final resting place - all are brought to life with keen assurance by this gifted and award-winning writer.

Maalouf has written an extraordinary book, describing the lives and times of people who have never appeared in fiction before and are unlikely to do so again. The book is far more than a simple historical novel; like the intricate embroidery of an oriental carpet it weaves back and forth through the centuries, linking the poetry, philosophy and passion of the Sufi past with modernism * Ahmed Rashid, Independent *
Maalouf's descriptions of the courts, the bazaar, the lives of mystics, kings and lovers are woven into an evocative and languid prose...and extraordinary book * INDEPENDENT *
An example of the best type of historical fiction * TIMES LITERARY SUPPLEMENT *
Maalouf's fiction offers both a model for the future and a caution, a way towards cultural understanding and a appalling measure of the consequences of failure. His is a voice which Europe cannot afford to ignore. * The Guardian *

Amin Maalouf is a Lebanese journalist and writer. He has served as a director of the weekly international edition of the leading Beirut dail an-Nahar, and editor in chief of Jeune Afrique. He lives in Paris with his wife and three children.

GOR001423886
Samarkand by Amin Maalouf
Amin Maalouf
Used - Very Good
Paperback
Little, Brown Book Group
1994-09-22
320
0349106169
9780349106168
N/A
Book picture is for illustrative purposes only, actual binding, cover or edition may vary.
This is a used book - there is no escaping the fact it has been read by someone else and it will show signs of wear and previous use. Overall we expect it to be in very good condition, but if you are not entirely satisfied please get in touch with us.