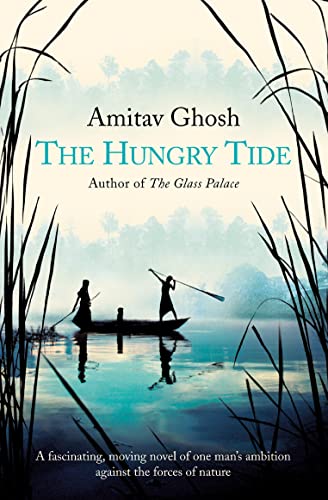 The Hungry Tide
by Amitav Ghosh

Fom the author of The Glass Palace, the widely-acclaimed bestseller. The Hungry Tide is a rich, exotic saga set in Calcutta and in the vast archipelago of islands in the Bay of Bengal.

The Hungry Tide by Amitav Ghosh

Fom the author of The Glass Palace, the widely-acclaimed bestseller. The Hungry Tide is a rich, exotic saga set in Calcutta and in the vast archipelago of islands in the Bay of Bengal.

An Indian myth says that when the river Ganges first descended from the heavens, the force of the cascade was so great that the earth would have been destroyed if it had not been for the god Shiva, who tamed the torrent by catching it in his dreadlocks. It is only when the Ganges approaches the Bay of Bengal that it frees itself and separates into thousands of wandering strands. The result is the Sundarbans, an immense stretch of mangrove forest, a half-drowned land where the waters of the Himalayas merge with the incoming tides of the sea.

It is this vast archipelago of islands that provides the setting for Amitav Ghosh's new novel. In the Sundarbans the tides reach more than 100 miles inland and every day thousands of hectares of forest disappear only to re-emerge hours later. Dense as the mangrove forests are, from a human point of view it is only a little less barren than a desert. There is a terrible, vengeful beauty here, a place teeming with crocodiles, snakes, sharks and man-eating tigers. This is the only place on earth where man is more often prey than predator.

And it is into this terrain that an eccentric, wealthy Scotsman named Daniel Hamilton tried to create a utopian society, of all races and religions, and conquer the might of the Sundarbans. In January 2001, a small ship arrives to conduct an ecological survey of this vast but little-known environment, and the scientists on board begin to trace the journeys of the descendants of this society.

'An absorbing story of a world in transition, brought to life through characters who love and suffer with equal intensity.' JM Coetzee

'Ghosh is one of the most sympathetic post-colonial voices to be heard today. He looks at love and loyalty, and examines the question of Empire and responsibility, of tradition and modernity.' Ahdaf Souief

'Amitav Ghosh is such a fascinating and seductive writer...a deeply serious writer, sure of his human and historical insights and confident in his ability to communicate them. I cannot think of another contemporary writer with whom it would be this thrilling to go so far, so fast' The Times

The author was born in Calcutta and grew up in Bangladesh, Sri Lanka and northern India. Educated in India and Britain, he now lives in New York.

GOR001245706
The Hungry Tide by Amitav Ghosh
Amitav Ghosh
Used - Very Good
Paperback
HarperCollins Publishers
2005-05-03
416
0007141785
9780007141784
N/A
Book picture is for illustrative purposes only, actual binding, cover or edition may vary.
This is a used book - there is no escaping the fact it has been read by someone else and it will show signs of wear and previous use. Overall we expect it to be in very good condition, but if you are not entirely satisfied please get in touch with us.