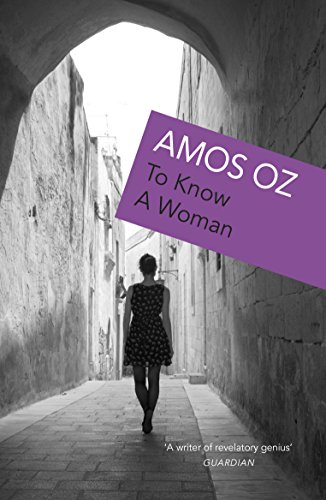 To Know A Woman
by Amos Oz

In Stock
$14.49
+10% GST
`A writer of revelatory genius' Guardian Following the bizarre accidental death of his wife, Israeli secret service agent Yoel Ravid retires to the suburbs with his daughter, mother and mother-in-law. his years of service to the state and the riddle of his daughter's behaviour.
Very Good Good
5 in stock

To Know A Woman Summary

To Know A Woman by Amos Oz

`A writer of revelatory genius' Guardian Following the bizarre accidental death of his wife, Israeli secret service agent Yoel Ravid retires to the suburbs with his daughter, mother and mother-in-law. After a lifetime of uncovering other people's secrets he is forced to look back at the lies he has told himself; at the desolate enigma of his wife's life and death; his years of service to the state and the riddle of his daughter's behaviour. `Humorous, melancholy and touching' New York Times

To Know A Woman Reviews

"Mr. Oz demonstrates his usual fluency as a writer. His portraits of Yoel, his mother, his mother-in-law and his daughter are, at once, humorous, melancholy and touching." -- Michiko Kakutani * New York Times *
"This is a book full of hints and echoes, from the past, from literature, from Yoel's former life. It is a remarkable novel, on the one hand a reminder of fiction's capacity to push at the boundaries of the expressible and on the other a meticulous account of one particular character's advance towards wisdom" * Daily Telegraph *
"A writer of extraordinary perception and of a warm humanity, which never slides into sentimentality and never dodges judgement. His dialogue shines with life and he evokes the feel of the physical world, the shimmer of light in the dawn or at evening, wonderfully well. The result is a book, which not only has a firm moral structure, one which poses and explores fundamental questions of human nature and of obligation, but also sparkles with vividly realised renderings of the details of daily life. It is very good indeed" * Scotsman *

Born in Jerusalem in 1939, Amos Oz was the internationally acclaimed author of many novels and essay collections, translated into over forty languages, including his brilliant semi-autobiographical work, A Tale of Love and Darkness. His last novel, Judas, was shortlisted for the Man Booker International Prize 2017 and won the Yasnaya Polyana Foreign Fiction Award. He received several international awards, including the Prix Femina, the Israel Prize, the Goethe Prize, the Frankfurt Peace Prize and the 2013 Franz Kafka Prize. He died in December 2018.

GOR001422666
To Know A Woman by Amos Oz
Amos Oz
Used - Very Good
Paperback
Vintage Publishing
1992-05-01
352
0099913402
9780099913405
N/A
Book picture is for illustrative purposes only, actual binding, cover or edition may vary.
This is a used book - there is no escaping the fact it has been read by someone else and it will show signs of wear and previous use. Overall we expect it to be in very good condition, but if you are not entirely satisfied please get in touch with us.