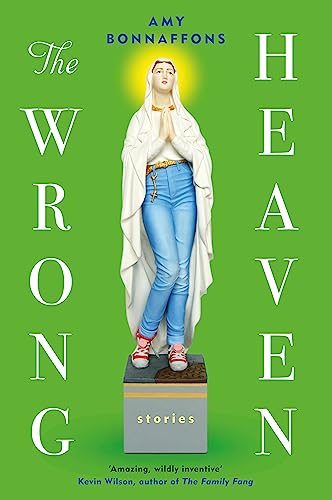 The Wrong Heaven
by Amy Bonnaffons

The Wrong Heaven by Amy Bonnaffons

'Incredibly fun to read but also full of these frank and wise observations
that stuck in my head long after' Aimee Bender, bestselling author of The Particular Sadness of Lemon Cake

In The Wrong Heaven, Amy Bonnaffons draws us into a delightfully strange universe, in which her conflicted characters seek to solve their sexual and spiritual dilemmas in all the wrong places. The title story's heroine reckons with grief while arguing with Jesus and Mary lawn ornaments that come to life when she plugs them in. In "Horse", we enter a world in which women transform themselves into animals through a series of medical injections. In "Alternate", a young woman convinces herself that all she needs to revive a stagnant relationship is the perfect poster of the Dalai Lama.

Intelligent, wry and crackling with energy, The Wrong Heaven is a stunning debut collection about the subtle mysteries beneath the surface of our lives and our power to transform.

'Goofy, poignant, and edged with the fantastic, the stories in Bonnaffons's debut collection initially surprise, then turn into one long, delicious rush. Not just fun but full of smart ideas' Library Journal

Incredibly fun to read but also full of these frank and wise observations that stuck in my head long after -- Aimee Bender, New York Times bestselling author of THE PARTICULAR SADNESS OF LEMON CAKE
In her amazing, wildly inventive collection, Amy Bonnaffons writes about transformation, each story further complicating the world as we know it. With a style that blends humor and sincerity in such strange, perfect ratios, Bonnaffons reveals the mysteries inside of us, just waiting to make themselves known. The Wrong Heaven, so wondrous, will alter you in all the necessary ways -- Kevin Wilson, author of THE FAMILY FANG
Amy Bonnaffons is the real deal. She's a woman of impossible juxtapositions. Funny and wise, thrilling and disciplined, strange and masterful. Do yourself a favor and read this: you'll be surprised where you find yourself, but you'll never feel lost -- Darin Strauss, author of CHANG & ENG
God, these stories. I wanted to stop people on the street. I know contemporary writers who can lacerate, and I know others who are funny, and I even know some who can pull off pathos. But I don't know any who can do all three at once - with mastery, mischief, and meaning - like Amy Bonnaffons. She gives you a key to that secret room where, for a dear second, everything stops moving so quickly and you get a glimpse of the truth -- Boris Fishman, author of DON'T LET ME BABY DO RODEO
These stories are eerie, enthralling, and hilarious. Women grow hooves, carve dolls who talk, have sex (or almost) with angels. Bonnaffons is a masterful chronicler of female desire and its discontents -- Leni Zumas, author of RED CLOCKS
Like the best storytelling, The Wrong Heaven feels like a gift - warm, intimate, and very, very funny. The characters are messy and vibrant and gloriously flawed, and their transformations are absolutely enthralling. This energizing collection will stay with me - happily so - for a long time. Read it -- Kayla Rae Whitaker, author of THE ANIMATORS
Amy Bonnaffons surprises her readers with the truth. Whether her characters are toasting marshmallows over a flaming plastic Jesus, finding freedom in the form of a horse, or lusting after the Angel of Death, their particular lonelinesses and their struggles with their uncooperative selves are always moving and always grant us profound insight into what it is to be human in the twenty-first century. There are many stories in this brilliantly inventive collection that I will never forget, and that I will read again and again over the course of my life -- Stephen O'Connor, author of THOMAS JEFFERSON DREAMS OF SALLY HEMINGS
At once goofy, poignant, and edged with the fantastic, the stories in Bonnaffons's debut collection initially surprise, then turn into one long, delicious rush. Not just fun but full of smart ideas * Library Journal starred review *
Channeling the fabulism of Karen Russell, these offbeat tales are both funny and profound * O, THE OPRAH MAGAZINE'S '10 Titles To Pick Up Now' *
In her first collection, Bonnaffons dazzles and cuts with ten hilarious and cathartic short stories . . . Resonant of Alissa Nutting's novels and George Saunders' Pastoralia, Bonnaffon's first collection presents a powerful and fresh new voice * BOOKLIST *
In the stories of her imaginative and unsettling debut, Bonnaffons creates worlds much like ours, except for the parts that are askew...When Bonnaffons hits the sweet spot between the emotional and physical realities of this world and the odd, askew thing that lets readers see them, the collection is at its best. This is an outstanding, exciting debut * PUBLISHERS WEEKLY starred review *
With her stunning debut The Wrong Heaven, Amy Bonnaffons has upgraded magic realism for the modern age . . . Seen through Bonnaffons' slyly humorous and sharp sensibility, even the most bizarre, heartbreaking, and mundane moments appear precious, interesting, and worth living -- Kseniya Melnik, author of SNOW IN MAY

These stories perfectly balance humor, strangeness, and keen insights into contemporary life. And by 'balance' I mean they are unbalanced in just the right way, always surprising, inventive, and deeply moving

-- Gabrielle Lucille Fuentes, author of THE SLEEPING WORLD
The Wrong Heaven is more than magical. It's a must-read. * HELLOGIGGLES *
Funny, strange, and inventive stories * POETS & WRITERS *
Creating a compelling universe in under ten thousand words - the task of the short story writer - is one of literature's most demanding challenges. Creating ten entirely distinct universes that successfully capture and distill the underlying ethos of the author's own era is a literary event that occurs only a few times in each generation... The publication of Amy Bonnaffons's debut short fiction collection, The Wrong Heaven, reveals itself to be one of those elusive and enthralling occasions . . . The author strikes like an earthquake in a land that hardly recalls mild tremors, evoking quivers of awe at both the power of the written word and the scope of human imagination . . . breathtaking * NEW YORK JOURNAL OF BOOKS *

Amy Bonnaffons is a founding editor of 7x7.la, a literary journal devoted to collaborations between writers and visual artists. Born in New York City, she now lives in Athens, GA, where she is working on a Ph.D. at the University of Georgia. She holds a B.A. from Yale University and a M.F.A. from New York University.

GOR009271425
The Wrong Heaven by Amy Bonnaffons
Amy Bonnaffons
Used - Very Good
Paperback
Orion Publishing Co
2018-08-09
256
1474610234
9781474610230
N/A
Book picture is for illustrative purposes only, actual binding, cover or edition may vary.
This is a used book - there is no escaping the fact it has been read by someone else and it will show signs of wear and previous use. Overall we expect it to be in very good condition, but if you are not entirely satisfied please get in touch with us.