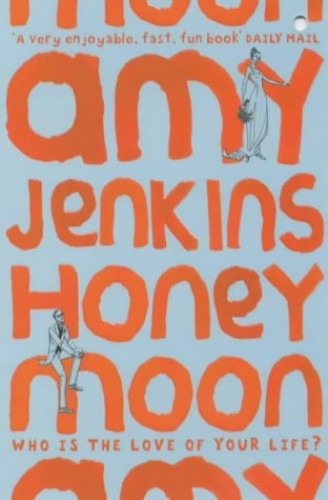 'Honey has doubts about her nice suitable man, she has doubts about commitment. And she still carries a torch for the man she calls the Love Of Her Life. Alex, someone she spent only one night with, seven years ago now. A perfect night. A night that makes her soul glow when she tells the story. A soul mate night.' Seven years on, with the memory of THAT night relegated to the realms of pure fantasy, Honey marries Ed, her nice suitable man, and unbeknown to her on the other side of the Atlantic, Alex marries another woman. As fate would have it, Honey and Alex do meet again. But what happens if they meet completely by coincidence, on a balcony in New York - even if they are both on their respective honeymoons?

HONEYMOON is simply wonderful - so powerful and funny and compelling, and without a trace of dizzy fizzy saccharine. Makes me want to follow Amy Jenkins around bribing her with sweets to be my friend. * Fiona Walker *
'I devoured Honeymoon in one big gulp on the way to Italy for my weekend away and thought it was delightful! I see just what you mean - it is cleverer and more thoughtful than most of what is out there in the same ball park - and sweeter too. I had a real little pang for Honey at the end when she goes to find her parents' grave and Ed finds her there (tho I must confess I wanted to slap her for most of the book cos I just thought Ed was yummy and she didn't deserve him, the silly mare...). Anyway, really enjoyed it and will be word of mouthing good things about it like crazy...' Judith Murray
Amy Jenkins' tale of a smart single girl screwing up the search for her perfect mate is the latest in this genre. As the best it should also be the last - wacky in its proposition on What If You Meet The Man Of Your Dreams On Your Honeymoon? and - post-multiple mishaps - wise on the whos, the hows and the must-haves of love for life. * Madeleine Kingsley *
'This year's summer sizzler. A tale of a smart, single girl screwing up the search for her perfect mate is wacky and wise on the whos, hows and must-haves of love for life.' PS Magazine
'It displays the same sure touch - funny, knowing and utterly authentic - that Amy showed in THIS LIFE' You
Amy Jenkins does witty and clever a great deal better than most. * Independent *
Filmic, sexy and fast-moving, it will go straight into the bestseller lists. Who are her fans? Just about every twenty and thirtysomething of either sex currently residing in Great Britain. * Marie Claire *
'Told with zest and a satisfyingly grown-up ring of cynicism' Aura
You'll love HONEYMOON - an addictively funny read by the writer of This Life. * Cosmopolitan *
'Jenkins pulls it off with spectacular brilliance. The characters are three-dimensional, the plot is smart, the angst is convincing and compulsive . . . A cracking book' Minx
'a strong, pacey plot and humour.' Sunday Telegraph
Undeniably entertaining. . . HONEYMOON will doubtless sell millions, take residency on every third beach towel this summer and be made into a film * Heat *
'Honeymoon is a superior read for the beach. Jenkins' prose is conversational: breezy and full of good jokes' Daily Telegraph
. . . a very enjoyable fast,fun book * Georgia Metcalfe, Daily Mail *
'Slick and funny' Sunday Mirror
'Jenkins gives good romance, with lurve scenes that are genuinely feel-good' The Mirror
'Definitely one to make you miss your bus stop' The Later
'Jenkins has redefined the notion of a page-turner' Guardian
'Bridget Jones with more spunk' Sky Magazine
'Jenkins is a mistress of the smart line' Independent
'The eponymous Honeymoon - Honey for short - of Jenkins's slick romantic comedy debut is a sassy successor to Bridget Jones. . . she stands on her own two feet as a strong comic heroine. Honey is more maturely self-aware and intellectually brighter than previous literary creations within this genre, but she loses none of the frank raunch and charming self-involvement that readers demand.' Publishers Weekly (US)
'a surefire summer hit' Venue
'Funny and romantic without being sickly sweet or cliched and there is something of a serious message at the core' What's On
'A bestseller . . . It's witty, it's fun, it's downright chick lit.' Middlesborough Evening Gazette
'Bouncy and skilfully written . . . Will certainly be one of the most popular reads of this year's holiday season.' Bridlingron Gazette & Herald

Born and brought up in London, Amy Jenkins went to Westminster and University College London where she read law. As the creator of THIS LIFE (BBC2), she has won fans in the millions. Her other credits include: BLINK, a short film for Channel 4 films and ELEPHANT JUICE, her first feature shot by Miramax. Film rights in HONEYMOON have been sold to Columbia Pictures.

GOR003164020
Honeymoon by Amy Jenkins
Amy Jenkins
Used - Very Good
Paperback
Hodder & Stoughton General Division
2001-01-27
368
0340750537
9780340750537
N/A
Book picture is for illustrative purposes only, actual binding, cover or edition may vary.
This is a used book - there is no escaping the fact it has been read by someone else and it will show signs of wear and previous use. Overall we expect it to be in very good condition, but if you are not entirely satisfied please get in touch with us.