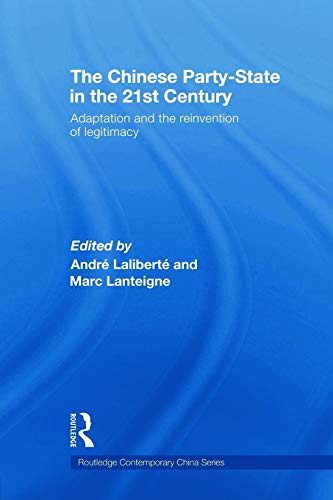 The Chinese Party-State in the 21st Century
by Andre Laliberte (University of Quebec at Montreal, Canada)

The Chinese Party-State in the 21st Century Summary

The Chinese Party-State in the 21st Century: Adaptation and the Reinvention of Legitimacy by Andre Laliberte (University of Quebec at Montreal, Canada)

As the Chinese Communist Party continues to move away from socialism, it faces a growing number of challenges to the claim that it represents the sole legitimate governing body in China. In order to reaffirm itself as the most effective force for keeping the country together, the CCP has adapted to contemporary political conundrums in a variety of ways.

Rejecting pessimistic perspectives which predict an erosion of state power or naive optimism that state-society relations will evolve towards a Western-style pluralist democracy in the foreseeable future, the contributions to this volume explore many ways in which the CCP selectively adapts to the challenges that have arisen from its strategy of rapid economic growth at the expense of political reform, in order to maintain its authority and relevance. Examining trends such as the reliance on religious charities originating from outside the PRC, the revival of local governance in urban settings, the passing of legislation for workers, or the multiplication of environmental non-governmental organizations, this book tackles the question of whether the Chinese government can overcome these challenges.

The Chinese Party-State in the 21st Century: Adaptation and the Reinvention of Legitimacy will appeal to students and scholars of Chinese politics, Asian politics, comparative politics and political sociology.

The Chinese Party-State in the 21st Century Reviews

'This edited volume makes a solid contribution to the literature on the legitimacy of the CCP' - Peter Sandby-Thomas, The China Quarterly, 196, December 2008

'The books distinctive approach to legitimacy is its focus on specific cases of the Chinese state's adaption tactics.]...[This book could be used in a variety of undergraduate and postgraduate courses on contemporary Chinese Politics and society' - Elena Barabantseva, University of Manchester UK, The China Journal, July 2009

About Andre Laliberte (University of Quebec at Montreal, Canada)

Andre Laliberte is Professor of Political Science at the University of Quebec at Montreal (UQAM), and Associate Professor at the Faculty of Graduate Studies, University of Ottawa, Canada. Marc Lanteigne is Lecturer in the Department of International Relations at St Andrews University, UK.

GOR010743474
The Chinese Party-State in the 21st Century: Adaptation and the Reinvention of Legitimacy by Andre Laliberte (University of Quebec at Montreal, Canada)
Andre Laliberte (University of Quebec at Montreal, Canada)
Routledge Contemporary China Series
Used - Very Good
Paperback
Taylor & Francis Ltd
2011-07-01
196
0415692180
9780415692182
N/A
Book picture is for illustrative purposes only, actual binding, cover or edition may vary.
This is a used book - there is no escaping the fact it has been read by someone else and it will show signs of wear and previous use. Overall we expect it to be in very good condition, but if you are not entirely satisfied please get in touch with us.