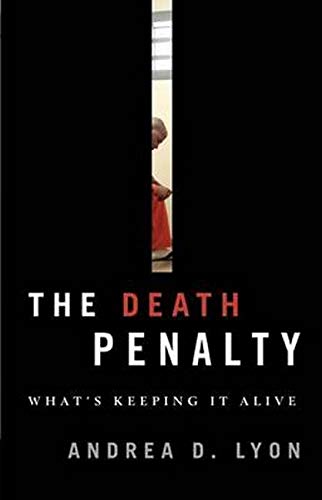 Used Price
$38.99
inc. GST
Free Shipping in Australia
In The Death Penalty: What's Keeping it Alive an award-winning criminal defense attorney turns a critical eye towards the death penalty in America. Filled with gripping case studies, the book analyzes why the death penalty remains active in most states in spite of well-documented flaws in the justice system.
Very Good

The United States is divided about the death penalty-17 states have banned it, while the remaining states have not. From wrongful convictions to botched executions, capital punishment is fraught with controversy. In The Death Penalty: What's Keeping It Alive, award-winning criminal defense attorney Andrea Lyon turns a critical eye towards the reasons why the death penalty remains active in most states, in spite of well-documented flaws in the justice system. The book opens with an overview of the history of the death penalty in America, then digs into the reasons capital punishment is a fixture in the justice system of most states. The author argues that religious and moral convictions play a role, as does media coverage of crime and punishment. Politics, however, plays the biggest role, according to the author, with no one wanting to look soft on crime. The death penalty remains a deadly political tool in most of the United States.

Andrea Lyon, Dean of Valparaiso University Law School in Indiana, once again brings her prodigious experience and knowledge to one of the most vexing and polarizing issues in our society, the death penalty, posing the question in her latest book:'What's keeping it alive?' . . .Lyon's book includes several informative charts and appendices, as well as links to the most current data on the death penalty. . . .Lyon predicts that the death penalty's days are numbered. Current debates about its cost and effectiveness, now occurring in most states where it hangs on, support her prediction. If it ends - or, to put it hopefully, when it ends - Andrea Lyon's reasoned, calm, yet passionate voice will have played an integral part in its demise. This book lays another blow to it. * The Champion, NACDL *
A stinging indictment of the death penalty system, focusing in most closely and importantly on the role of the media, and, especially, the moral corruption that permeates many of the prosecutors' offices that regularly do death penalty cases. A must read for anyone interested in this topic. -- Michael L. Perlin, New York Law School
This is an impassioned brief against the American death penalty from a knowledgeable criminal justice insider. Experienced capital defense attorney Andrea D. Lyon shows us through her own life's work why capital punishment is-and should be-headed for history's dustbin. -- Carol Steiker, Harvard University
Andrea Lyon does a superb job capturing the key issues surrounding the death penalty-past and present. Framed from the perspective of a lawyer who has litigated capital cases, Lyon presents the information with a balanced perspective and thoroughly canvasses the legal landscape of the death penalty. -- Durant Frantzen, Texas A&M University-San Antonio

Andrea D. Lyon is an award-winning criminal defense attorney and Dean of the Valparaiso University Law School. The first woman to be lead counsel in a death case in the United States, she has tried more than 130 homicide cases, more than thirty of which were potential capital cases. Of those nineteen were convicted and found eligible for the death penalty. None of those clients received the death penalty. Lyon is the author of a memoir Angel of Death Row: My Life as a Death Penalty Defense Lawyer, as well as other books and articles.

GOR010031751
The Death Penalty: What's Keeping It Alive by Andrea D. Lyon
Andrea D. Lyon
Used - Very Good
Hardback
Rowman & Littlefield
2014-11-06
174
1442232676
9781442232679
N/A
Book picture is for illustrative purposes only, actual binding, cover or edition may vary.
This is a used book - there is no escaping the fact it has been read by someone else and it will show signs of wear and previous use. Overall we expect it to be in very good condition, but if you are not entirely satisfied please get in touch with us.