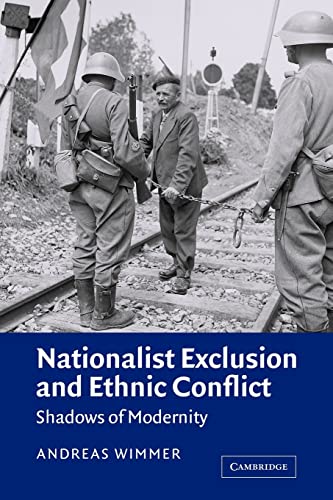 In Stock
$24.49
+10% GST
Wimmer argues that modern societies are not as inclusive as is often suggested. Equality and participation are reserved for members of the one ethnic or national group with a privileged relation to the state. Historical case studies show how this leads to nationalist exclusion and ethnic conflict.
Very Good
Only 1 left

Andreas Wimmer argues that nationalist and ethnic politics have shaped modern societies to a far greater extent than has been acknowledged by social scientists. The modern state governs in the name of a people defined in ethnic and national terms. Democratic participation, equality before the law and protection from arbitrary violence were offered only to the ethnic group in a privileged relationship with the emerging nation-state. Depending on circumstances, the dynamics of exclusion took on different forms. Where nation building was 'successful', immigrants and 'ethnic minorities' are excluded from full participation; they risk being targets of xenophobia and racism. In weaker states, political closure proceeded along ethnic, rather than national lines and leads to corresponding forms of conflict and violence. In chapters on Mexico, Iraq and Switzerland, Wimmer provides extended case studies that support and contextualise this argument.

'... complex and thought-provoking.' Contemporary Political Theory
'... subtle ... theoretically rich ... an extremely valuable resource for students of participation and democracy.' Political Studies Review
'Wimmer's knowledge of the relevant historical and social science literature is always impressive ... this expansion of political anthropology beyond the level of the microstudy has to be welcomed.' Anthropos
'Wimmer's book is learned and theoretically wide-ranging, and his perspectives on social closure (Weber's concept) are based on a reformulation of the concept of culture. ... Wimmer's book is ... a stimulating addition to the interdisciplinary literature on nationalism.' Journal of the Royal Anthropological Institute
"...engaging, well-written, and well-organized...The author illustrates his argument with excellent case studies..." American Journal of Sociology

Andreas Wimmer is Professor of Political and Cultural Change and Director at the Center for Development Studies of the University of Bonn.

Introduction; Part I. Theoretical Explorations: 1. Compromise and closure: a theory of social dynamics; 2. The making of modern communities; Part II. State Building and Ethnic Conflict: 3. Who owns the state? Ethnic conflicts after the end of empires; 4. Nationalism and ethnic mobilisation in Mexico; 5. From empire to ethnocracy. Iraq since the Ottomans; Part III. The Politics of Exclusion in Nationalised States: 6. Racism and xenophobia; 7. Nationalising multi-ethnic Switzerland.

GOR008822477
Nationalist Exclusion and Ethnic Conflict: Shadows of Modernity by Andreas Wimmer (Rheinische Friedrich-Wilhelms-Universitat Bonn)
Andreas Wimmer (Rheinische Friedrich-Wilhelms-Universitat Bonn)
Used - Very Good
Paperback
Cambridge University Press
2002-06-06
332
052101185X
9780521011853
N/A
Book picture is for illustrative purposes only, actual binding, cover or edition may vary.
This is a used book - there is no escaping the fact it has been read by someone else and it will show signs of wear and previous use. Overall we expect it to be in very good condition, but if you are not entirely satisfied please get in touch with us.