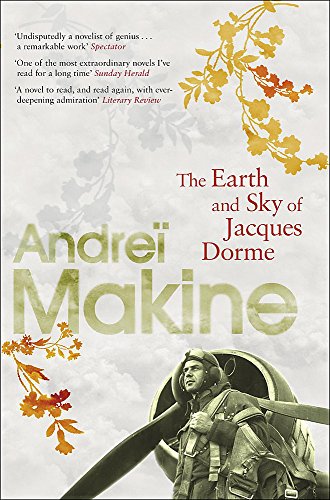 The Earth and Sky of Jacques Dorme
by Andrei Makine

In Stock
$23.49
inc. GST
An astounding novel that penetrates the 20th-century experience, from one of Europe's most feted authors
Very Good Good Well Read
5 in stock

The Earth and Sky of Jacques Dorme Summary

The Earth and Sky of Jacques Dorme by Andrei Makine

In present-day France a Russian writer recalls his harsh childhood at a Stalingrad orphanage in the 1960s and the old Frenchwoman, a family friend, whose tales fed his dreams of a better world. One story in particular has stayed with him: that of her brief, passionate affair, during World War II, with the French fighter pilot Jacques Dorme, who subsequently died in a plane crash in the Siberian mountains. So the narrator decides to retrace Jacques Dorme's steps, beginning a journey which leads him not only to revisit the land of his birth but also to see his adopted homeland in an unflattering new light. A profound and moving novel about the dangers of ideology and of war, delivered with humour, sensuousness and great lyricism.

The Earth and Sky of Jacques Dorme Reviews

The year's finest novel . . . a truly remarkable achievement. Makine will surely one day win the Nobel Prize. * Francis King, Books of the Year, Spectator *
Undisputedly a novelist of genius . . . a remarkable work * Spectator *
One of the most extraordinary novels I've read for a long time . . . endlessly fascinating and beautifully written * Sunday Herald *
Hold[s] the reader in an emotional captivity from which there is no escape till long after the book has been put down * Andrey Kurkov, Guardian *
This is a novel to read, and read again, with ever-deepening admiration. * Allan Massie, Literary Review *
One of the greatest European novelists of our time . . . When you leave a Makine novel, you are simultaneously bereft and enriched. * Herald *
With remarkable concision, he takes what could be vast and weighty topics - nationality, identity, memory and truth - and creates a series of unforgettable images and incidents. * Daily Mail *
'I was mightily impressed by The Earth and Sky of Jacques Dorme . . . it's beautifully crafted and still resonates. A modern masterpiece." * George Rosie, Books of the Year, Sunday Herald *
'Makine packs great steppes-full of history into compact, bejewelled boxes of prose... An epic novel in - perfect - miniature.' * Boyd Tonkin, Independent *

Andrei Makine was born in Siberia but has lived in France since 1987. He is the author of nine novels including LE TESTAMENT FRANCAIS, which won both the Prix Goncourt and Prix Medicis, and has gone on to sell over a million copies in France alone and to be published in translation in twenty-nine countries.

GOR002806773
The Earth and Sky of Jacques Dorme by Andrei Makine
Andrei Makine
Used - Very Good
Paperback
Hodder & Stoughton General Division
2006-01-02
192
034083126X
9780340831267
N/A
Book picture is for illustrative purposes only, actual binding, cover or edition may vary.
This is a used book - there is no escaping the fact it has been read by someone else and it will show signs of wear and previous use. Overall we expect it to be in very good condition, but if you are not entirely satisfied please get in touch with us.