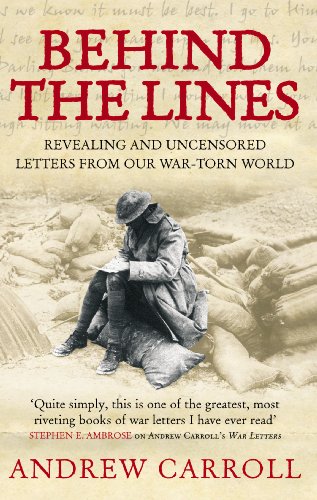 Behind The Lines
by Andrew Carroll

Out of Stock
$17.49
inc. GST
Featuring letters and emails from war zones, and including the memories both sides of the hostilities documented, this book is an emotive and poignant depiction of war. It looks at warfare through the eyes of troops and civilians. It covers the major global conflicts from World War I and II and the American Revolution, up to Afghanistan and Iraq.
Very Good
Only 0 left

Behind The Lines Summary

Behind The Lines: Revealing and uncensored letters from our war-torn world by Andrew Carroll

'Quite simply, this is one of the greatest, most riveting books of war letters I have ever read.' Stephen E. Ambrose on War Letters

In 2001 Andrew Carroll authored the US top ten bestseller, War Letters - a unique compilation of extraordinary correspondence from American soldiers serving in US conflicts throughout history. Following the publication of this landmark work Andrew was inundated with letters from soldiers all around the world (to date he has a staggering 75,000 letters). Inspired by these messages he embarked on a quest to discover other previously unpublished letters written during conflicts around the globe. For three years Andrew travelled the world zealously collecting letters from over 35 different countries including Great Britain. Behind the Lines is the remarkable anthology that has been put together as a result of this work.

The first book of its kind, Behind the Lines will be a dramatic, intimate and unprecedented look at warfare as seen through the eyes of troops and civilians. Unparalleled in geographical and historical scope it covers all major global conflicts from World War I and II and the American Revolution, up to Afghanistan and Iraq. Featuring never-before-seen letters and emails from war zones, and including the memories and thoughts from those on both sides of the hostilities documented, Behind the Lines will be a truly emotive and poignant depiction of war assembled by a uniquely talented and driven author who always keeps the general reader and narrative in mind.

Behind The Lines Reviews

A fascinating and moving book * Daily Telegraph *
This is stuff from the front line, from the heart and from the guts * Saga *
A remarkable social history, vividly bringing home the pathos, sacrifice and horror of war * Glasgow Evening Times *
A priceless treasure -- Tom Brokaw * War Letters *

Andrew Carroll is 35 and lives in Washington DC. Following a fire that destroyed his house and his own small collection of letters, he founded the Legacy Project, an international all-volunteer initiative to preserve wartime correspondence. He is the editor of three New York Times bestsellers: War Letters, Letters of a Nation, and In Our Own Words. He is also executive director of the American Poetry and Literacy Project, which he co-founded with the late Nobel laureate Joseph Brodsky. In the USA he has been responsible for bringing back the 'Armed Service Editions' (ASEs), which were pocket-sized editions of national bestsellers and literary classics handed out to US troops stationed abroad during World War II.

GOR003323333
Behind The Lines: Revealing and uncensored letters from our war-torn world by Andrew Carroll
Andrew Carroll
Used - Very Good
Paperback
Ebury Publishing
2006-07-06
464
0091903408
9780091903404
N/A
Book picture is for illustrative purposes only, actual binding, cover or edition may vary.
This is a used book - there is no escaping the fact it has been read by someone else and it will show signs of wear and previous use. Overall we expect it to be in very good condition, but if you are not entirely satisfied please get in touch with us.