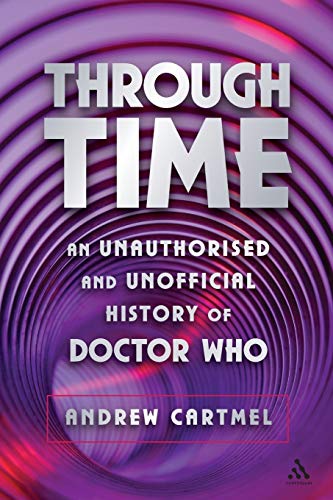 Through Time
by Andrew Cartmel

Used Price
$17.99
inc. GST
Free Shipping in Australia
A classic both of science fiction and television drama, and an adventure in the tradition of Lewis Carroll, Conan Doyle and HG Wells, this TV series was created for children. Its strength has been its writers and their ideas. This history of the show looks into its social and cultural impact - an ideal read for committed and casual fans alike.
Reviews:
Trustpilot
Very Good

Through Time: An Unofficial and Unauthorised History of Doctor Who by Andrew Cartmel

The quirky British television series Doctor Who is a classic both of science fiction and television drama. First broadcast in 1963, it has remained an influential TV presence ever since, with an eagerly anticipated new series airing in 2005. As a vehicle for satire, social commentary, or sheer fantasy adventure, Doctor Who is unparalleled. It was a show created for children, but it was immediately usurped by adults. Arriving at a time of upheaval in the popular arts in Britain, Doctor Who was born into a television tradition influenced by the TV plays of Dennis Potter, the cult television drama The Prisoner, the James Bond films and Stanley Kubrick's science fiction triptych - Dr Strangelove, 2001: A Space Odyssey and A Clockwork Orange. A British fantasy adventure that has unfolded across television screens over decades in the tradition of Lewis Carroll, Conan Doyle and HG Wells, the strength of Doctor Who has always been its writers and the ideas they nurtured. In this new history of the show, Andrew Cartmel (who was the script editor on Doctor Who from 1987 to 1990) looks into its social and cultural impact - providing a fascinating read for committed and casual fans alike.

"The appeal of Through Time lies not in thoughtful analysis or insight, but in sheer joy: it's funny, witty, and idiosyncratic, focused on story arcs and behind-the-scene personalities, all filtered through the mind of an insider." Science Fiction Research Association Review
"This is a book everyone can enjoy- not just Who fans, but all those curious about how and why science fiction does- and does not- work on television."- William Manus, "Book Scope, "September 2006

Andrew Cartmel is a writer who lives in London. He was the script editor on Doctor Who from 1987 to 1990, and is also the author of the War Trilogy of spin-off novels from the show.

Foreword; Introduction; Chapter 1: British science fiction, Time Machines and Triffids; Chapter 2: Doctor Who's origins as a children's program; Chapter 3: The astonishing success of Doctor Who and the Daleks; Chapter 4: The regeneration game; Chapter 5: No longer merely a Time Lord; Chapter 6: The quandary of special effects. Chapter 7: Doctor Who takes on America; Chapter 8: The crowded TARDIS; Chapter 9: The Seventh Doctor; Chapter 10: The show goes into dormancy; Chapter 11: Doctor Who fandom; Chapter 12: The new Doctor Who; Appendix: A case study of a Doctor Who story.

GOR001967047
Through Time: An Unofficial and Unauthorised History of Doctor Who by Andrew Cartmel
Andrew Cartmel
Used - Very Good
Paperback
Bloomsbury Publishing PLC
2005-12-01
242
0826417345
9780826417343
N/A
Book picture is for illustrative purposes only, actual binding, cover or edition may vary.
This is a used book - there is no escaping the fact it has been read by someone else and it will show signs of wear and previous use. Overall we expect it to be in very good condition, but if you are not entirely satisfied please get in touch with us.