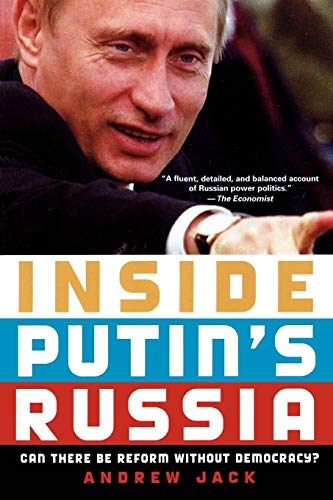 Inside Putin's Russia
by Andrew Jack

In Stock
$11.99
+10% GST
Drawing on interviews with Putin, other leading figures, and ordinary Russians, Andrew Jack, former Moscow Bureau Chief of the Financial Times, describes how the former KGB official emerged from the shadows of the Soviet secret police and lowly government jobs to become the most powerful man in Russia.
Very Good
Only 1 left

Inside Putin's Russia: Can There Be Reform without Democracy? by Andrew Jack

International views of Russia have changed drastically in the last decade, due in part to the leadership of the decidedly pro-Western President Yeltsin. It was not without concern that we saw the next elected leader pulled from the ranks of the former KGB. Andrew Jack, former Moscow bureau chief for the Financial Times, uses in-depth research and years of journalistic experience to bring us the first full picture of Vladimir Putin. Jack describes how Putin grew to become the most powerful man in Russia, defying domestic and foreign expectations and presiding over a period of strong economic growth, significant restructuring, and rising international prestige. Despite criticism of his handling of the war in Chechnya and of the controls he introduced on parliament and the media, Putin has united Russian society and maintained extraordinarily high popularity. Inside Putin's Russia digs behind the rumors and speculation, illuminating Putin's character and the changing nature of the Russia he leads. It highlights some of the more troubling trends as he consolidates his leadership during a second presidential term marred by the Beslan tragedy, the attacks on Yukos and Russian policy towards Ukraine. Now with a new Epilogue by the author, this invaluable book offers important insights for anyone interested in the past, present, and future of Russia.

A fluent, detailed and balanced account of Russian power politics, with a lively emphasis on the Kremlin's onslaught against independent media and stroppy tycoons. * The Economist *
In describing the big picture, Jack achieves a fine balance, criticizing without animosity and making the right allowances for peculiarities of history and culture. * Financial Times *
Gives even experienced Russia-watchers a better perspective on the man and the milieu he operates in. [Jack] writes with care, more like an historian than an anecdote laden, self-important journalist a l'Americaine. * Roger Fontaine, Washington Times *
Lively, fluent and well-informed. * Guardian *
Andrew Jack has been responsible for some of the best coverage of Russian affairs in recent years. Inside Putin's Russia is intelligent, meticulously researched and readable: everything a political biography should be. * Sunday Times *
In the most comprehensive account of Putin's first term in office now in print, Jack presents a judicious account of his achievements: tax reform, balanced budgets, sharply reduced international lending and a booming economy.... As Jack details in several excellent chapters, Putin continued a brutal and ineffective war in Chechnya, acquired de facto control of all major national television networks, turned both houses of parliament into rubber stamps, arbitrarily jailed or exiled political foes, rigged regional elections, arrested outspoken journalists, weakened political parties and increased the role of the FSB (the successor organization to the KGB). * Michael McFaul, Washington Post Book World *
A fluent, detailed and balanced account of Russian power politics, with a lively emphasis on the Kremlin's onslaught against independent media and stroppy tycoons. * The Economist *
An excellent (and wary) political and economic overview of an often opaque U.S. ally. * Publishers Weekly *
Jack's book is, as the title suggests, an attempt to see Russia from within, to understand it on its own terms. Jack is not sympathetic to the regime, but he is fascinated by the country.... We learn a huge amount about Putin's Russia along the way.... The restraint and the skepticism that run through Jack's book do even more credit to the author now that Putin's credentials are going up in smoke. * Robert Cottrell, New York Review of Books *
Andrew Jack could hardly have picked a better time to come out with a book on Vladimir Putin. It helps contextualize some of the new concerns about Putin's leadership and about whether Russia, once seemingly on the path to democracy, is lurching instead toward dictatorship. Jack puts the president's moves into perspective. * Anna Kuchment, Newsweek International *
A helpful overview of the Putin era since 2000.... Jack, who is Moscow bureau chief for the Financial Times, gives us a country with 'chill breezes returning from the past,' possibly headed toward a new political Ice Age. * Carlin Romano, The Philadelphia Inquirer *
A sober look at the new Russia. * Denver Post *
A must-read for avid Russia-watchers...masterfully reveals the inner workings of Putin's Kremlin.... Jack draws on extensive first-hand knowledge from his six years as Moscow bureau chief for London's Financial Times to enliven his narrative.... Jack's book is well written and meticulously researched, exhibiting refreshingly few of the oversimplifications that too often pepper popular accounts of contemporary Russian politics.... An impressive book that goes a long way toward improving our collective understanding of what motivates Russian politics today. * Juliet Johnson, Globe & Mail *
Inside Putin's Russia is as much about getting inside Putin himself, at least insofar as intelligent, informed speculation can penetrate a naturally closed personality. Jack, The Financial Times' Moscow bureau chief, focuses on five critical areas that Putin has shaped (and they him): the war in Chechnya, media relations, trimming the oligarchs, institutional reform, and foreign policy. These are twice-told tales, but Jack reconstitutes them very well, adding fresh detail and a reporter's keen eye. * Robert Legvold, Foreign Affairs *
A clear-eyed, highly readable look at modern Russia, with all its ongoing enigmas and mysteries. * Kirkus Reviews *
Jack gives considerable attention to the regime's takeover of NTV, the most independent of the Russian television channels, by the state-controlled energy company Gazprom. This is a story that has been told before, but what makes Mr. Jack's narrative particularly useful is that he describes the extent to which NTV was corrupt itself.... Jack provides valuable background to the Chechen conflict. * David Satter, The New York Sun *
Admirable.... Jack shows in fascinating detail how [the so-called oligarchs] came by their wealth. * Spectator *
Jack's work argues persuasively that so far Russia's democracy has been a "virtual democracy" only and that the Russian people must learn the basics of democracy to make it work. * Library Journal *
Andrew Jack has given us a vivid, sophisticated picture of Russia's political and economic culture under President Vladimir Putin. Jack offers a penetrating analysis of Putin's contradictory path as a modernizer of Russia * and of where this path might lead. *
Inside Putin's Russia provides astute and accurate observations on what Russia has become under President Putin. In a lucid and highly readable book, Jack shows devastatingly how Putin has systematically curtailed democracy in Russia, while capitalism has triumphed. No other book gives such a clear feel of Putin's Russia. * Anders Aslund, Senior Associate, Carnegie Endowment for International Peace *
Andrew Jack's work is a valuable contribution to the literature on Russia at the start of the 21st Century: intelligent, fair-minded, and enlivened by the author's experiences as a journalist in Russia, and by his meetings with some of the leading figures there. * Anatol Lieven, author of the forthcoming America Right or Wrong: An Anatomy of American Nationalism *
Jack came to understand quite a bit. [he] even displays an ear for Russian humor, which distills the current political system. Putin dominates Jack's book even more than the leader dominates Russia, but the portrait we get is fairly acute. For Jack, the lightbulb illuminated while he was attempting to report the Slavneft "auction" in December 2002. Equally splendid is his reporting over the course of a few pages on the telltale beverage giant Wimm-Mill-Dann. * The New Republic *

Andrew Jack is a journalist for the Financial Times, currently based in London. He was based in Russia from 1998 to 2004, covering the end of the Yeltsin era, the rise to power of Vladimir Putin, and his entire period in office.

GOR003610781
Inside Putin's Russia: Can There Be Reform without Democracy? by Andrew Jack
Andrew Jack
Used - Very Good
Paperback
Oxford University Press Inc
2005-12-15
384
0195189094
9780195189094
N/A
Book picture is for illustrative purposes only, actual binding, cover or edition may vary.
This is a used book - there is no escaping the fact it has been read by someone else and it will show signs of wear and previous use. Overall we expect it to be in very good condition, but if you are not entirely satisfied please get in touch with us.