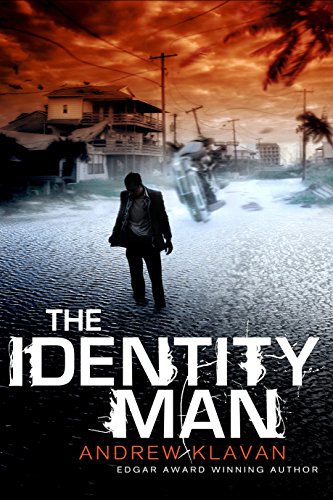 The Identity Man
by Andrew Klavan

A fugitive framed for murder gets a new face and a new life from a mysterious foreigner. So why are the cops still after him?

'The most original American novelist of crime and suspense' STEPHEN KING

The Identity Man by Andrew Klavan

A nationwide manhunt is underway for John Shannon, a petty criminal framed for murder. But he's convinced he won't get caught. He's hiding in the ruins of a city destroyed by a terrible flood, and, thanks to a mysterious foreigner calling himself the Identity Man, he has a new face, new papers, and a new life.

But the city is crawling with corruption. Crooked politicians, gangsters and dirty cops are everywhere, and for some reason Shannon doesn't understand, all of them want him dead.

John Shannon has run out of second chances, and now he's running out of time. Moving through the darkness in the burnt-out shambles of a dirty town, he must ferret out the secret of his new life, before he is left with no life at all.

In Andrew Klavan's deft hands, we get a brilliant, nail-biting, rollercoaster of a novel that grips tight as the restraints on an electric chair. * VAL McDERMID *
Klavan is one of my drop-everything-and-read authors. * GREGG HURWITZ *
Powerful and dark. A plot-twisting, nail-biting noir that defines edge-of-the-chair suspense * FAYE KELLERMAN *
As shamelessly thrilling as a rollercoaster * Observer *
Andrew Klavan is impressive. Coolly detached, immensely detailed and totally convincing. Every character is brought to life. * Sunday Telegraph *
Time flies when you're having fun, waiting to die, or reading Andrew Klavan. Nerve-plucking suspense. * New York Times *

Andrew Klavan, a double Edgar Award-winner, is the bestselling author of Don't Say a Word, The Animal Hour, True Crime and Damnation Street. He studied at Berkeley in California, where he also worked as a reporter. He has written twenty-four novels and four films. He lives in southern California.

GOR003876739
The Identity Man by Andrew Klavan
Andrew Klavan
Used - Very Good
Paperback
Atlantic Books
2012-01-01
352
1848875371
9781848875371
N/A
Book picture is for illustrative purposes only, actual binding, cover or edition may vary.
This is a used book - there is no escaping the fact it has been read by someone else and it will show signs of wear and previous use. Overall we expect it to be in very good condition, but if you are not entirely satisfied please get in touch with us.