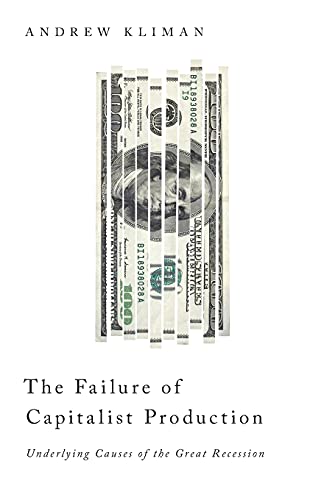 The Failure of Capitalist Production
by Andrew Kliman

The Failure of Capitalist Production Summary

The Failure of Capitalist Production: Underlying Causes of the Great Recession by Andrew Kliman

The recent financial crisis and Great Recession have been analysed endlessly in the mainstream and academia, but this is the first book to conclude, on the basis of in-depth analyses of official US data, that Marx's crisis theory can explain these events.

Marx believed that the rate of profit has a tendency to fall, leading to economic crises and recessions. Many economists, Marxists among them, have dismissed this theory out of hand, but Andrew Kliman's careful data analysis shows that the rate of profit did indeed decline after the post-World War II boom and that free-market policies failed to reverse the decline. The fall in profitability led to sluggish investment and economic growth, mounting debt problems, desperate attempts of governments to fight these problems by piling up even more debt - and ultimately to the Great Recession.

Kliman's conclusion is simple but shocking: short of socialist transformation, the only way to escape the 'new normal' of a stagnant, crisis-prone economy is to restore profitability through full-scale destruction of existing wealth, something not seen since the Depression of the 1930s.

The Failure of Capitalist Production Reviews

'Essential reading for all Marxists and lefts interested in what caused the Great Recession. It debunks the fads and fashionable arguments of neoliberalism, underconsumption and inequality with a battery of facts. It restores Marx's law of profitability to the centre of any explanation of capitalist crisis with compelling evidence and searching analysis. It must be read' -- Michael Roberts
'One of the very best of the rapidly growing series of works seeking to explain our economic crisis. ... The scholarship is exemplary and the writing is crystal clear' -- Professor Bertell Ollman, Department of Politics, NYU, author of Dance of the Dialectic
'Among the myriad publications on the present day crisis, this work stands out as something unusual. Kliman is an excellent theorist, and an equally excellent analyst of empirical data' -- Paresh Chattopadhyay, Universite du Quebec a Montreal
'Clear, rigorous and combative. Kliman demonstrates that the current economic crisis is a consequence of the fundamental dynamic of capitalism, unlike the vast bulk of superficial contemporary commentary that passes for economic analysis' -- Rick Kuhn, Deutscher Prize winner, Reader in Politics at the Australian National University and long-time activist.

Andrew Kliman is Professor of Economics at Pace University, New York. He is the author of Reclaiming Marx's 'Capital' (Lexington, 2006 ) and The Failure of Capitalist Production (Pluto, 2011).

Acknowledgements
List of Abbreviations
List of Tables
List of Figures
1. Introduction
2. Profitability, the Credit System, and the "Destruction of Capital"
3. Double, Double, Toil and Trouble: Dot-com boom and home-price bubble
4. The 1970s--Not the 1980s--as Turning Point
5. Falling Rates of Profit and Accumulation
6. The Current-cost "Rate of Profit"
7. Why the Rate of Profit Fell
8. The Underconsumptionist Alternative
9. What Is to Be Undone?
Bibliography
Index

GOR011058607
The Failure of Capitalist Production: Underlying Causes of the Great Recession by Andrew Kliman
Andrew Kliman
Used - Like New
Paperback
Pluto Press
2011-11-01
256
0745332390
9780745332390
N/A
Book picture is for illustrative purposes only, actual binding, cover or edition may vary.
The book has been read, but looks new. The book cover has no visible wear, and the dust jacket is included if applicable. No missing or damaged pages, no tears, possible very minimal creasing, no underlining or highlighting of text, and no writing in the margins.