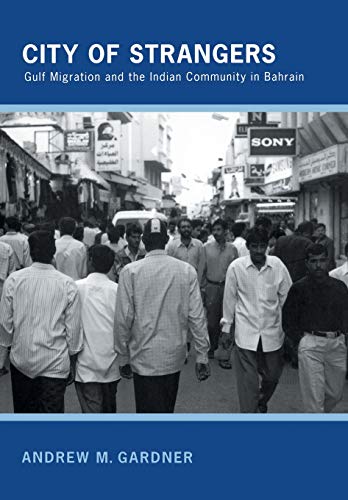 In City of Strangers, Andrew M. Gardner explores the everyday experiences of workers from India who have migrated to the Bahrain and the sponsorship system, the kafala, under which they labor and upon which they depend for continued employment.

City of Strangers: Gulf Migration and the Indian Community in Bahrain by Andrew M. Gardner

In City of Strangers, Andrew M. Gardner explores the everyday experiences of workers from India who have migrated to the Kingdom of Bahrain. Like all the petroleum-rich states of the Persian Gulf, Bahrain hosts an extraordinarily large population of transmigrant laborers. Guest workers, who make up nearly half of the country's population, have long labored under a sponsorship system, the kafala, that organizes the flow of migrants from South Asia to the Gulf states and contractually links each laborer to a specific citizen or institution. In order to remain in Bahrain, the worker is almost entirely dependent on his sponsor's goodwill. The nature of this relationship, Gardner contends, often leads to exploitation and sometimes violence.

Through extensive observation and interviews Gardner focuses on three groups in Bahrain: the unskilled Indian laborers who make up the most substantial portion of the foreign workforce on the island; the country's entrepreneurial and professional Indian middle class; and Bahraini state and citizenry. He contends that the social segregation and structural violence produced by Bahrain's kafala system result from a strategic arrangement by which the state insulates citizens from the global and neoliberal flows that, paradoxically, are central to the nation's intended path to the future. City of Strangers contributes significantly to our understanding of politics and society among the states of the Arabian Peninsula and of the migrant labor phenomenon that is an increasingly important aspect of globalization.

"Andrew Gardner's City of Strangers is a breath of fresh air. Not only does the book take on an ill-explored subject, but it does so with sharp insight, unyielding clarity, and all the richness that one expects from good ethnographic writing.... Gardner explores in depth the multiple dimensions of the Indian community itself and the ways in which different sections of this community position themselves vis-a-vis Bahraini politics and civil society. What results is a more textured picture of the Indian community in Bahrain, one not reduced to a helpless pawn in a broader game of neoliberalism, but that actively participates in fashioning its own identities.... The clarity with which Gardner presents his argument, coupled with the book's conciseness, makes it an excellent addition to reading lists for any course on the Middle East or migration studies at any level."

Andrew M. Gardner is Assistant Professor of Anthropology at the University of Puget Sound.

1. Introduction: Structural Violence and Transnational Migration in the Gulf States
2. Pearls, Oil, and the British Empire: A Short History of Bahrain
3. Foreign Labor in Peril: The Indian Transnational Proletariat
4. Strategic Transnationalism: The Indian Diasporic Elite
5. The Public Sphere: Social Clubs and Voluntary Associations in the Indian Community
6. Contested Identities, Contested Positions: English-Language Newspapers and the Public Sphere
7. The Invigorated State: Transnationalism, Citizen, and State
8. Conclusion: Bahrain at the Vanguard of Change in the GulfNotes
References
Index

GOR010224855
City of Strangers: Gulf Migration and the Indian Community in Bahrain by Andrew M. Gardner
Andrew M. Gardner
Used - Very Good
Hardback
Cornell University Press
2010-07-01
208
0801448824
9780801448829
N/A
Book picture is for illustrative purposes only, actual binding, cover or edition may vary.
This is a used book - there is no escaping the fact it has been read by someone else and it will show signs of wear and previous use. Overall we expect it to be in very good condition, but if you are not entirely satisfied please get in touch with us.