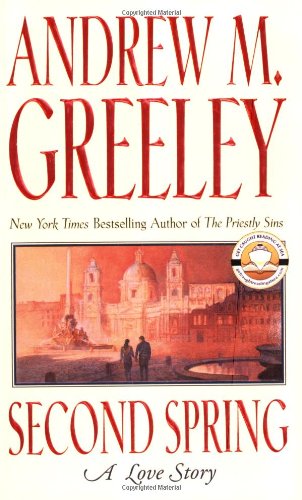 Used Price
$20.49
inc. GST
Free Shipping in Australia
Approaching 50, Chucky O'Malley finds himself in the grip of a debilitating mid-life crisis. He hasn't lost his faith exactly, but he does feel disillusioned and depressed and is searching for a way to renew his weary spirit. Fortunately he doesn't have to face the challenge alone.
Reviews:
Trustpilot
Very Good

It's 1978 and the whole country, exhausted from the twin traumas of Vietnam and Watergate, seems to be suffering from a massive hang-over. Chucky O'Malley knows how the country feels; approaching fifty he finds himself in the grip of a debilitating mid-life crisis. He hasn't lost his faith, exactly, but he does feel disillusioned and depressed. As he travels the world, Chucky searches for a way to renew his weary spirit. Fortunately, he doesn't have to face this challenge alone. With the loving support of his family, and especially his irrepressible and adoring wife, Rosemarie, he just might rediscover his lost hope and optimism in time for a Second Spring...

Priest, sociologist, author and journalist, Father Andrew M. Greeley built an international assemblage of devout fans over a career spanning five decades. His books include the Bishop Blackie Ryan novels, including "The Archbishop in Andalusia," the Nuala Anne McGrail novels, including "Irish Tweed," and "The Cardinal Virtues." He was the author of over 50 best-selling novels and more than 100 works of non-fiction, and his writing has been translated into 12 languages.

Father Greeley was a Professor of Sociology at the University of Arizona and a Research Associate with the National Opinion Research Center (NORC) at the University of Chicago. In addition to scholarly studies and popular fiction, for many years he penned a weekly column appearing in the "Chicago Sun-Times" and other newspapers. He was also a frequent contributor to "The New York Times," the "National Catholic Reporter," "America "and "Commonweal," and was interviewed regularly on national radio and television. He authored hundreds of articles on sociological topics, ranging from school desegregation to elder sex to politics and the environment.

Throughout his priesthood, Father Greeley unflinchingly urged his beloved Church to become more responsive to evolving concerns of Catholics everywhere. His clear writing style, consistent themes and celebrity stature made him a leading spokesperson for generations of Catholics. He chronicled his service to the Church in two autobiographies, "Confessions of a Parish Priest" and "Furthermore!"

In 1986, Father Greeley established a $1 million Catholic Inner-City School Fund, providing scholarships and financial support to schools in the Chicago Archdiocese with a minority student body of more than 50 percent. In 1984, he contributed a $1 million endowment to establish a chair in Roman Catholic Studies at the University of Chicago. He also funded an annual lecture series, "The Church in Society," at St. Mary of the Lake Seminary, Mundelein, Illinois, from which he received his S.T.L. in 1954.

Father Greeley was a penetrating student of popular culture, deeply engaged with the world around him, and a lifelong Chicago sports fan, cheering for the Bulls, Bears and the Cubs. Born in 1928, he died in May 2013 at the age of 85.

GOR010796240
Second Spring by Andrew M. Greeley
Andrew M. Greeley
O'Malley Family Saga
Used - Very Good
Paperback
St Martin's Press
2004-05-28
340
0765342383
9780765342386
N/A
Book picture is for illustrative purposes only, actual binding, cover or edition may vary.
This is a used book - there is no escaping the fact it has been read by someone else and it will show signs of wear and previous use. Overall we expect it to be in very good condition, but if you are not entirely satisfied please get in touch with us.