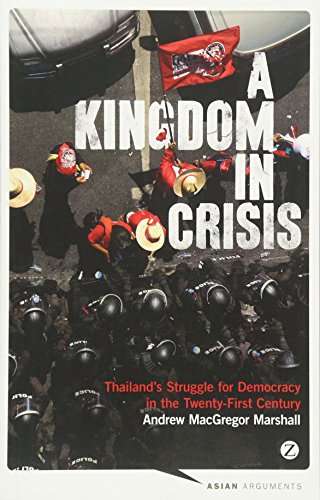 A Kingdom in Crisis by Andrew MacGregor Marshall

A fascinating, engaged account of a country on the brink of change.

A Kingdom in Crisis: Thailand's Struggle for Democracy in the Twenty-First Century by Andrew MacGregor Marshall

'Perhaps the best introduction yet to the roots of Thailand's present political impasse. A brilliant book.'
Simon Long, The Economist

Struggling to emerge from a despotic past, and convulsed by an intractable conflict that will determine its future, Thailand stands at a defining moment in its history. Scores have been killed on the streets of Bangkok. Freedom of speech is routinely denied. Democracy appears increasingly distant. And many Thais fear that the death of King Bhumibol Adulyadej is expected to unleash even greater instability.

Yet in spite of the impact of the crisis, and the extraordinary importance of the royal succession, they have never been comprehensively analysed - until now. Breaking Thailand's draconian lese majeste law, Andrew MacGregor Marshall is one of the only journalists covering contemporary Thailand to tell the whole story.

Marshall provides a comprehensive explanation that for the first time makes sense of the crisis, revealing the unacknowledged succession conflict that has become entangled with the struggle for democracy in Thailand.

'Given the relative paucity of accessible and critical English-language writing about the Thai monarchy, and the risks that such writing entails, A Kingdom in Crisis should be considered a significant accomplishment, and Zed Books should be given credit for being willing to publish it. For the many Westerners who continue to repeat outmoded and Orientalist slogans about the Kingdom, the book should prove to be a real eye-opener-not least in its discussion of the events that led to the current king taking the throne and expanding the social and political significance of the monarchy.'
Pacific Affairs Journal

'Andrew MacGregor Marshall has written perhaps the best introduction yet to the roots of Thailand's present political impasse, He explains how an aspect of the crisis whose importance many analysts in Thailand and overseas have an interest in minimising - the looming succession in the Thai royal family - is in fact central. A brilliant book that could perhaps have been written only by somebody who knows Thailand so well he knew he had to leave the country to write it.'
Simon Long, Banyan columnist, The Economist

'An explosive analysis that lays bare what the Thai elite has tried to keep hidden for decades. A clear-eyed view of what is really at stake in Thailand's continuing turmoil.'
David Streckfuss, author of Truth on Trial in Thailand: Defamation, Treason, and Lese-Majeste

'A timely and highly readable account of the grim political reality of the Land of Smiles. An essential primer for every visitor.'
Joe Studwell, author of Asian Godfathers and How Asia Works

'Finally someone says the unsayable. A must read for observers of Thai politics.'
Pavin Chachavalpongpun, associate professor at Centre for Southeast Asian Studies, Kyoto University

'A brilliant, incisive rewriting of Thailand's history and monarchy. An instant classic that promises to permanently change the conversation, both inside and outside the country.'
Christine Gray, anthropologist and pioneering analyst of Thailand's monarchy

'A bold and convincing argument that at the centre of Thailand's political turmoil is the succession to the throne.'
Paul Handley, journalist and author of The King Never Smiles

'A Kingdom in Crisis ... engages critically with the discourse surrounding the monarchy and represents an important contribution.'
Journal of Contemporary Asia

Andrew MacGregor Marshall is a journalist, political risk consultant and corporate investigator, focusing mainly on Southeast Asia. He spent seventeen years as a correspondent for Reuters, covering conflicts in, among others, Iraq, Afghanistan and Pakistan, and political upheaval in Thailand. Marshall resigned from Reuters 2011 after the news agency refused to publish his analysis of leaked US cables illuminating the role played by Thailand's monarchy in the political conflict that has engulfed the kingdom. A fugitive from Thai law as a result of his journalism about the royal family, he now lives in Sydney and works as head of news for Greenpeace Australia.
GOR006487968
9781783600571
1783600578
A Kingdom in Crisis: Thailand's Struggle for Democracy in the Twenty-First Century by Andrew MacGregor Marshall
Andrew MacGregor Marshall
Asian Arguments
Used - Very Good
Paperback
Zed Books Ltd
2014-10-09
248
N/A
Book picture is for illustrative purposes only, actual binding, cover or edition may vary.
This is a used book - there is no escaping the fact it has been read by someone else and it will show signs of wear and previous use. Overall we expect it to be in very good condition, but if you are not entirely satisfied please get in touch with us
Trustpilot