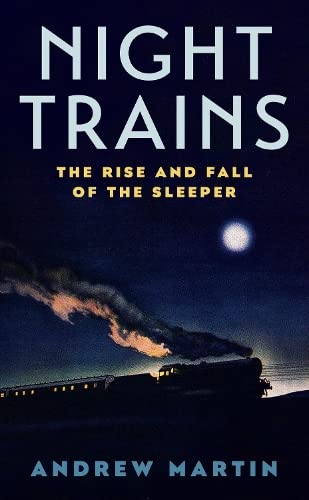 Night Trains: The Rise and Fall of the Sleeper by Andrew Martin

Night trains have long fascinated us with the possibilities of their private sleeping compartments, gilded dining cars, champagne bars and wealthy travellers. Authors from Agatha Christie to Graham Greene have used night trains to tell tales of romance, intrigue and decadence against a rolling background of dramatic landscapes. The reality could often be as thrilling: early British travellers on the Orient Express were advised to carry a revolver (as well as a teapot). In Night Trains, Andrew Martin attempts to relive the golden age of the great European sleeper trains by using their modern-day equivalents. This is no simple matter. The night trains have fallen on hard times, and the services are disappearing one by one. But if the Orient Express experience can only be recreated by taking three separate sleepers, the intriguing characters and exotic atmospheres have survived. Whether the backdrop is 3am at a Turkish customs post, the sun rising over the Riviera, or the constant twilight of a Norwegian summer night, Martin rediscovers the pleasures of a continent connected by rail. By tracing the history of the sleeper trains, he reveals much of the recent history of Europe itself. The original sleepers helped break down national barriers and unify the continent. Martin uncovers modern instances of European unity - and otherwise - as he traverses the continent during 'interesting times', with Brexit looming. Against this tumultuous backdrop, he experiences his own smaller dramas, as he fails to find crucial connecting stations, ponders the mystery of the compartment dog, and becomes embroiled in his very own night train whodunit.

A fine elegy ... Compelling ... witty and full of history and railway nuggets. -- Michael Binyon * Sunday Times *
You do not have to be a trainspotter to enjoy this book. It is social history, a kind of epitaph to a way of travel that seems to be lost, at least in Europe. -- Christian Wolmar * Spectator *
Andrew Martin has cornered the train market. He is the Bard of the Buffer, the Balladeer of the Blue Train, the Laureate of Lost Property ... I picked up Night Trains knowing that I would be entertained, but also in the hope that his many years of experience would teach me how to sleep on a sleeper ... Andrew Martin is the best sort of travel-writer: inquisitive, knowledgeable, lively, congenial. He is also very funny, while never letting the humour drive reality, rather than vice versa. Every page has a good joke. -- Craig Brown * Mail on Sunday *
A delightful book ... charmingly combines Martin's own travels, as he recreates journeys on famous trains such as the Orient Express, with a serious, occasionally geeky, history of those elegant wagons lits of the past ... Even if you're not into the detail of rail gauges, this book is the perfect companion as you wait for the 8.10 from Hove. -- Nigel Jones * Observer *
Excellent ... Mr Martin paints a vivid picture of this world on rails ... he proves a witty companion who wears his knowledge lightly -- Michael Murray-Fennell * Country Life *
A love letter to a dying breed -- Michael Kerr * Telegraph *
This is one for railway novices and enthusiasts alike. -- Hannah Solel * Financial Times *
Praise for Underground, Overground: 'Martin's knowledge is both encyclopaedic and full of quirky digressions, based on everyday observation. * Evening Standard *
A jaunty history ... studded with little observational gems ... he can ... stop you in your tracks with a well-turned phrase * Sunday Times *
Praise for Belles & Whistles: 'Martin is entertaining company, alive to the history of his route ... leaves you with renewed confidence that trains can still be the most civilised way to travel. * Financial Times *
His wonderfully well-informed, anecdotal prose punches more than just tickets * The Times *
Both a loving description of his personal travels and an analysis of why [the sleeper trains] are being discontinued. * The Oldie *

Andrew Martin is a journalist and author. His previous books for Profile include Underground, Overground (9781846684784) and Belles and Whistles (9781781252130). He has written for the Evening Standard, Sunday Times, Independent on Sunday, Daily Telegraph and New Statesman. His 'Jim Stringer' series of novels based around railways are published by Faber. His latest novel, The Yellow Diamond, is set in the world of London's super-rich.

GOR008077437
Night Trains: The Rise and Fall of the Sleeper by Andrew Martin
Andrew Martin
Used - Very Good
Hardback
Profile Books Ltd
2017-02-09
256
1781255598
9781781255599
N/A
Book picture is for illustrative purposes only, actual binding, cover or edition may vary.
This is a used book - there is no escaping the fact it has been read by someone else and it will show signs of wear and previous use. Overall we expect it to be in very good condition, but if you are not entirely satisfied please get in touch with us.